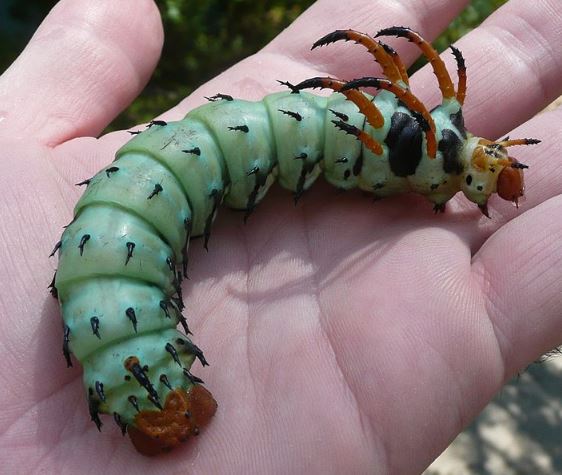 The fact that most people adore butterflies and moths is indisputable, but what about caterpillars? Your response to this question will be influenced by a few things, including your age, gender, experience, and even your level of curiosity. Caterpillars are unwelcomed visitors in the garden for some, especially when they gorge themselves on the leaves of your favorite plants. Others may perceive this slightly prickly creature as aggressive on the outside but delicate on the inside.

We might as well be astounded by the second unique stage of a fascinating metamorphosis called the caterpillars as we are by the hypnotic beauty of a full-grown butterfly or moth.

These animals go through a series of molting stages known as instars, each with its own set of brilliant colors, changes, and sizes.

Now we’ll take you on a tour of the world’s seven largest caterpillars.

The hickory horned devil, which is about the size of a large hot dog and is 5 to 5.5 inches in length, is at the top of the list.

The stunning regal moth, sometimes known as a royal moth, is the source of this natural caterpillar, which is the largest in Missouri.

It gets its name from the fact that it has an orange horn-like characteristic with black points. It’s usually bluish-green in hue, although it can vary.

Walnut, butternut, and white walnut trees, as well as pecan, persimmon, sweetgum, and sumac trees, are among its favorite foods. This amazing species is primarily nocturnal, but it does emerge during the day. 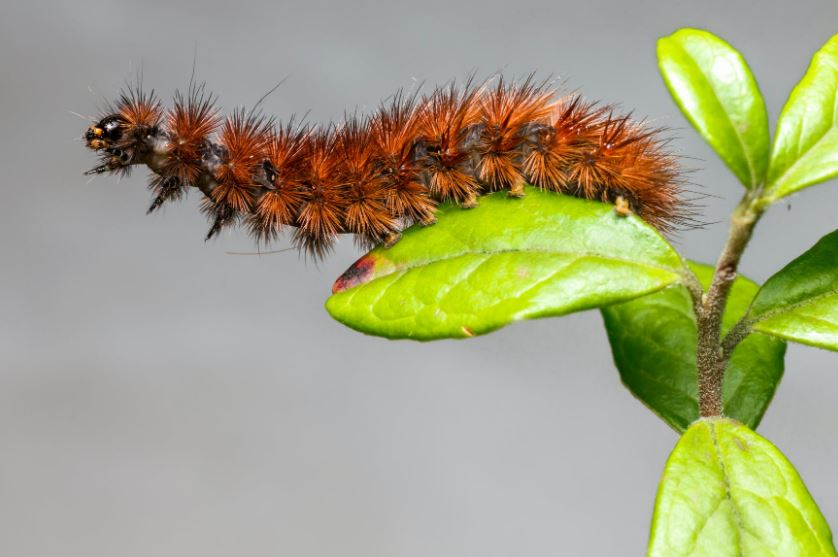 The Imperial Moth can be found in southern New England, and its full-grown larvae can reach a length of 3 to 5.5 inches taking the second rank. It is recognized for its brilliant palette of colors during its larval stages.

It has a spiky appearance with orange and transverse white streaks in its first instar. It has two long, fork-like black horns with white filaments at the tips. A similar forklike scoli can be seen near the bottom of its body, while the rest of its body has shorter variants of this structure.

It develops darker brown tints and fine hair on its body as it grows older. The color of the head also shifts from orange to red-orange to red. As it progresses through the fourth and fifth instars, it reflects a wide range of colors. Brown, burgundy, and green. Hues range from mild to dark. It also shows orange to red patches surrounding its spectacles. 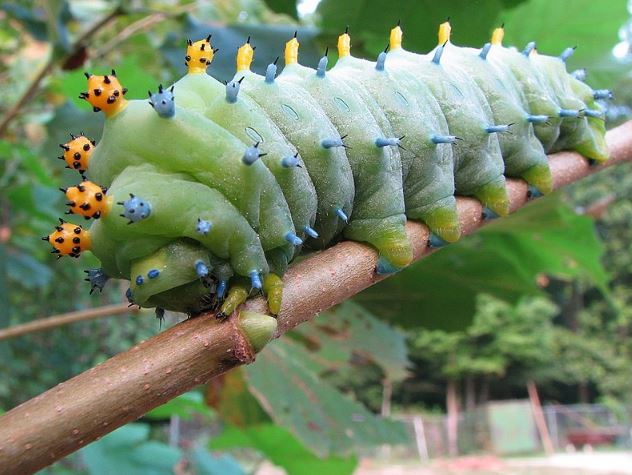 The Crecopia larvae, which may grow up to 4.5 inches long, come in third place. The dramatic color transformations that this caterpillar undergoes at each instar are its distinguishing trait.

It seems black at first, with many spikes on its back and face. On the second instar, it turns from dark yellow to yellow and feeds heavily on leaves. This larva’s exuberant appearance of light green or blue-green as it matures is quite similar in its third to the fifth instar.

On top of its protuberances, black short bristles are visible, and these bumps come in a variety of colors, including light blue, light yellow, orange, and even red near the larva’s head.

It feeds heartily on maple, plum, apple, pecan, birch, and many others. 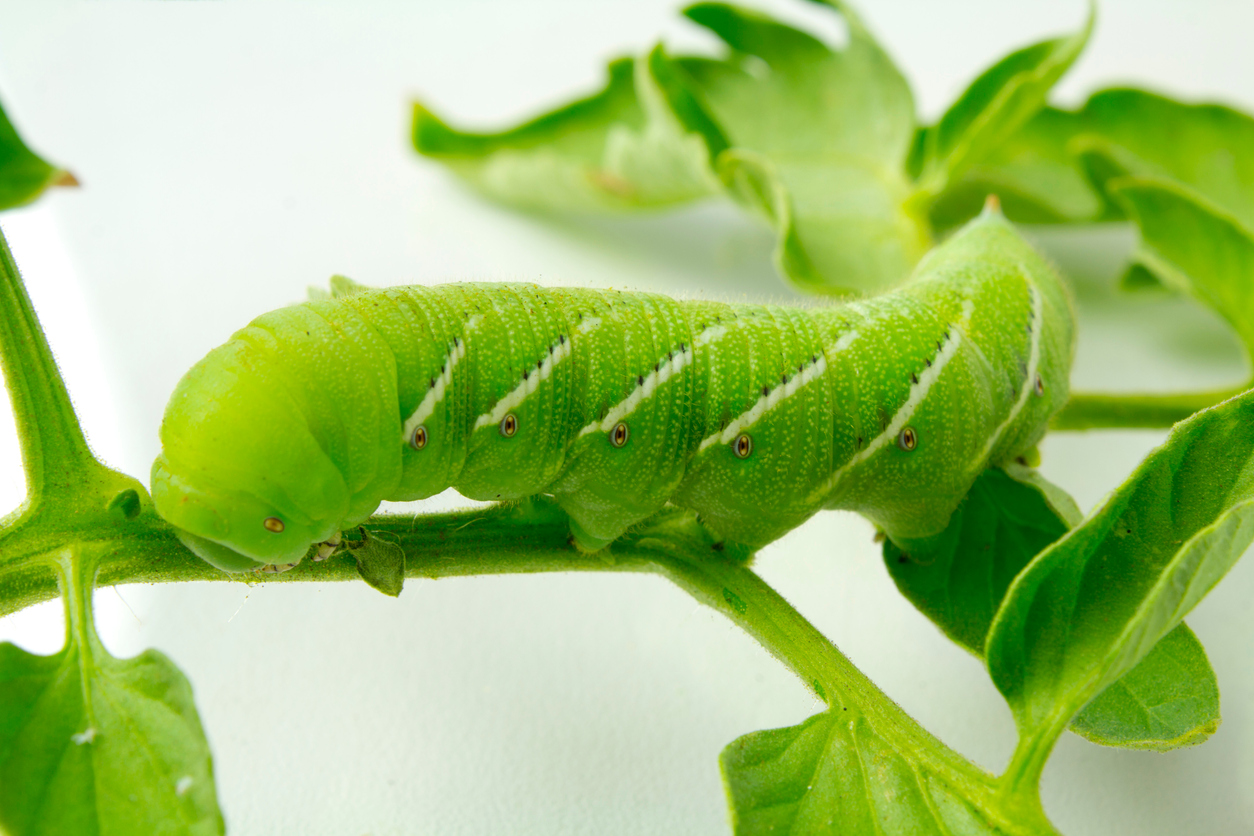 The larvae of the Tobacco Hornworm, also known as Goliath worms, measure roughly 70 mm – 80 mm (3.1 inches) in length, whereas a mature Carolina Sphinx Moth has a wingspan of around 90-120mm (4.72 inches) which earns the fourth spot of this list.

It has a beautiful green iridescent appearance at the start of its larval stage, with diagonal white striping markings bordered with black at the upper section of each line. It was named because of the brilliant reddish projection on the last abdominal segment that resembled a “horn”-like characteristic. 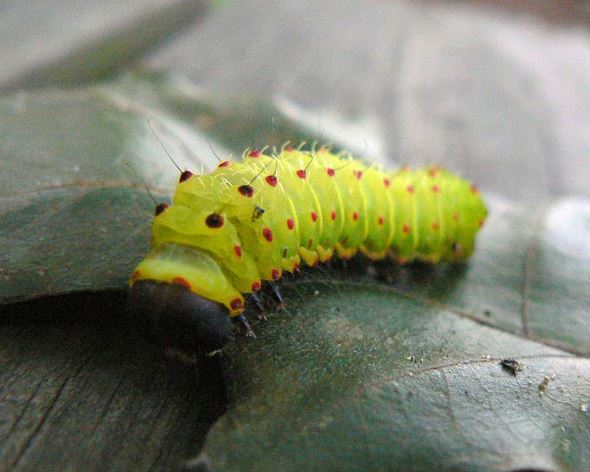 The American moon moth is a fantastic creature that is commonly seen in North America. It has a length of roughly 55-70mm (2.7 inches) and is ranked fifth on this list. The hue of a fully grown caterpillar is vivid green (luminous).

This caterpillar is remarkable in that its larvae are not venomous like those of other species. According to some research, there is no chemical component on its spine or setae in its thoracic abdominal region.

This tree-dwelling species eat a lot of walnuts, sweetgum, paper birch, hickory, and other tree leaves. 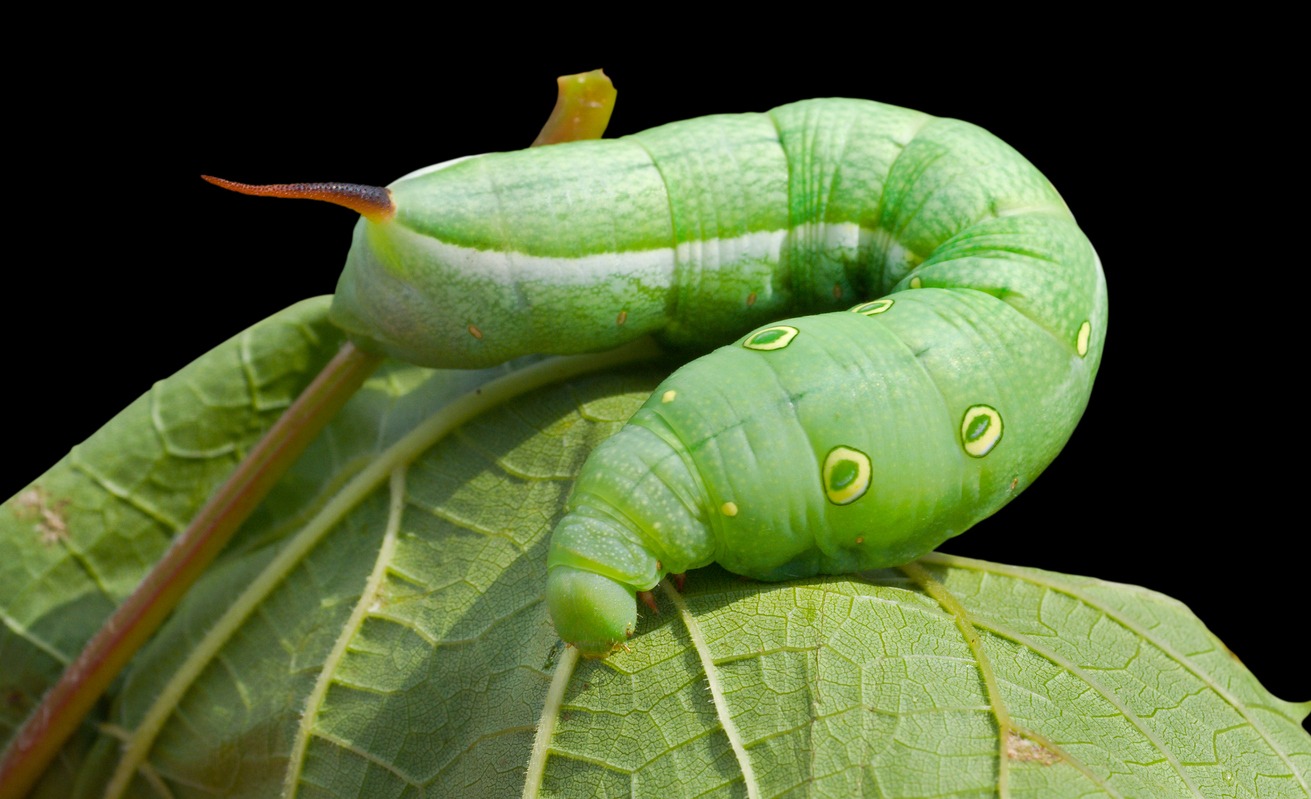 The sixth place goes to the Polyphemus larva, which grows from roughly 5 to 6 millimeters in its first instar to around 60 millimeters (2.3 inches) in its fifth instar. The mature moth, with a wingspan of roughly 3.5 to 5.5 inches, is Missouri’s second-largest moth.

Because of its enormous eye patches in the middle of its hindwing, it is called after the giant one-eyed monster cyclops from Greek mythology.

It appears white with transverse black bars at the top and sides of its segment during its initial instar. It changes color to translucent yellowish-green with a little orange to red lumps at the top of its segment as it molts in older instars.

In Missouri, larvae feed on more than 20 different tree and shrub species. Silver maple, birch, hazelnut, and oak are among its favorite places to live and feed. Adults don’t eat at all and can only last a few weeks.

The Promethea Moth is also known as the Spicebush Silkmoth because it prefers spicebush, but it can also be found on tulip trees, sassafras, sweet bay, white ash, lilac, and other plants.

This species’ larvae measure about 3mm in length when they hatch and can grow up to 45mm (1.7 inches) in resting position but up to 60mm (2.3 inches) in an active state, ranking seventh in this list.

During its first instar, it has black and yellow stripes, but as it evolves to its last instar, it turns pale green. It also features four vivid red protuberances on its thoracic area and a yellow knob on its eighth abdominal segment.

One unique feature of this species is that the males are active during the day while the females are nocturnal. They overlap in activity early hours of the evening hence they can still propagate despite their active state difference.

So, the next time you meet these amazing creatures in the garden, the forest, or the different sites where they feed and reproduce, treat them with extreme caution and gentleness. They may not appear appealing to some or many of us, but when given the chance to develop into full-fledged butterflies, they are quite amazing.