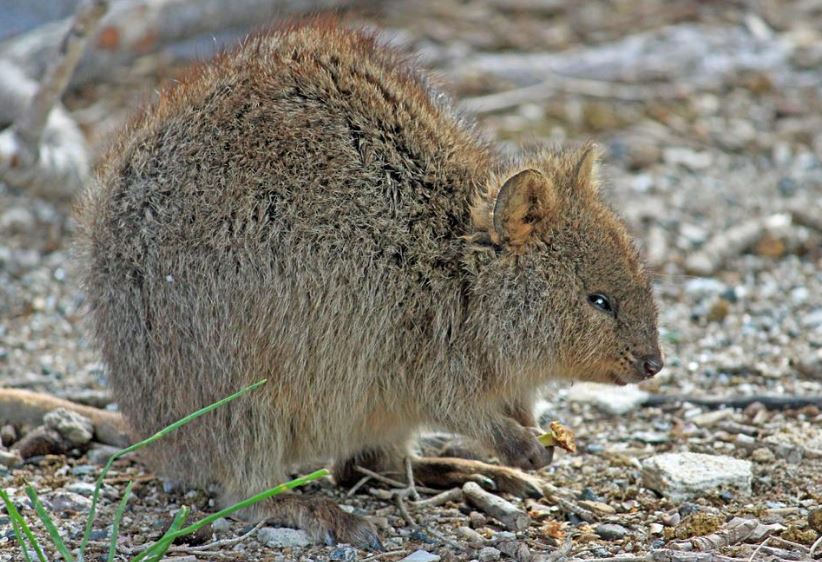 A smile is the simplest gesture of warmth one can offer to someone. This is the most powerful weapon you can employ to win the hearts of many people. This is true of Quokka’s smile, which just went viral.

Instagram, Facebook, Twitter, YouTube, and China’s Weibo are all flooded with cute selfies of the Quokka. This adorable critter has enchanted the hearts of millions of people all around the world just like how Coco the dog who eats corn on a cob like a human captured the interests of many.

The quokka with the scientific name Setonix brachyurus, is best known as a scrub wallaby with a short tail. It, like the kangaroo, belongs to the macropod family. The images on the internet give the idea that these creatures are little, but they are not. They are quite similar in size to a domestic cat.

This gregarious creature can weigh anywhere from 2.5 to 5 kg. It’s around 20 inches long, including the tail. It has a strong frame, a short broad head, and rounded ears like a small plump kangaroo. Quokkas’ fur is rough brown on top and pastel brown underneath.

The most serious hazard to these adorable critters is habitat loss. Only about 20,000 quokkas remain in the wild. A mature female can only have two children every year.

Quokkas are commonly referred to as the happiest animals on the planet because they always appear to be smiling at you, even when they aren’t. The shape of their mouths is linked to their smile. To keep themselves cool, they frequently put their tongue out. People perceive these motions as though they are making a smile, thus they are instantly adorable.

The quokka is said to be the first mammal spotted in Australia by Europeans. Willem de Vlamingh spotted so many of them in 1696 that he named the island “‘t Eylandt Rottenest,” or “Rat’s Nest Island,” which has become the name of Rottnest Island to this day. However, a Dutch sailor named Samuel Volckertzoon noted these wonderful creatures in 1658 when he wrote about “a wild cat” on Rottnest Island.

Selfies with the Quokkas are taken by Celebrities 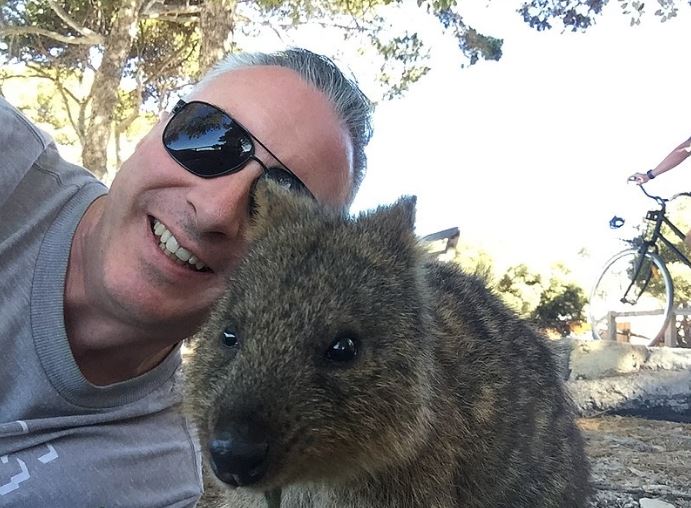 The popular selfie posts of well-known personalities such as famous actor Matt Damon, legendary tennis player Roger Federer, rocker Pete Wentz, surfer Kelly Slater, actress Margot Robbie, Aussie gem Chris Hemsworth, and many others, including famous bloggers, vloggers, and travelers from all over the world, are what has made this species so viral recently.

We came across the information supplied by Campbell Jones, who had the nicest moments with this sociable, curious, fluffy, famous, selfie junkie quokka. Jones revealed that while bicycling on Rottnest Island with his girlfriend, they came upon one, which he naturally snapped with his GoPro for an Instagram post. Following the brief photoshoot, the quokka pursued them as though calling them back. More on this can be found in Campbell’s post or in his interview with Perth Now. The story is uplifting and adds to the charm of this friendly critter. Quokkas are so friendly and can choose to tag along as a buddy which is relatable to the friendship of Rocky, the horse with his adorable friend Callie, a labrador.

Quokkas are not part of the “New Big 5” conservation initiative to rescue vulnerable, endangered, or critically endangered wildlife, but they are considered one of the most photogenic animals on the planet. No one can deny that this little mammal is the best selfie co-star one could ever have, given its growing popularity on social media with no less than the notable people mentioned above.

Rottnest Island, Australia, is home to the majority of the Quokka population. It is home to 10,000 to 12,000 of these vulnerable species, accounting for more than half of the world’s quokka population. Some can also be found on Australia’s Bald Island. The San Diego Zoo is likewise working to save these magnificent species.

Some Suggestions for Taking a Quokka Selfie

The renowned government advertisement featuring tennis legend Roger Federer with a Quokka, as well as viral selfies of numerous celebrities taking selfies, had a significant impact on Rottnest Island tourism. People are flocking to the island in droves to take selfies and get a personal glimpse of this gregarious creature. Quokkas are not afraid of humans and may even accompany them if they find them appealing.

Here are some pointers for getting a good selfie with this gentle creature.

Hurray to the Vegans

Vegans have found not only gorgeous selfie partners, but also herbivore allies. They can also be vegan ambassadors thanks to Quokkas. These animals eat a wide range of grasses, sedges, and bushes. Their favorite foods are fresh shoots and leaves. They are also believed to enjoy Australia’s endemic Guichenotia ledifolia, a tiny shrub species in the Malvaceae family. They can take energy from stored fats in their tail when food is scarce. Human food is dangerous to them, so be careful with your crumbs and junk foods, it may kill them.

Beautiful species abound on our globe. They, like us, only want to live a happy life. The ecosystem’s amazing creation and works are shared by all of us. Striking a balance between them and us has always been a contentious and hotly disputed topic. Whatever viewpoint we choose, one compassionate path is to care, share, and love, because they, too, enjoy living.