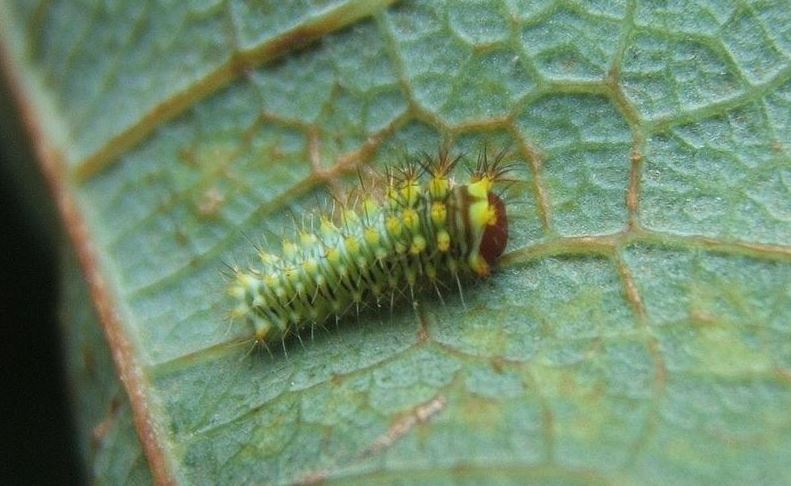 The first instar of the Polyphemus larva, or Antheraea polyphemus, is about 5 to 6 millimeters long, and the fifth instar is about 60 millimeters (2.3 inches) long. The mature moth is the second-largest moth in Missouri, with wingspan measurements ranging from 3.5 to 5.5 inches. The Polyphemus caterpillar is included in the world’s seven largest caterpillars. It is named after the enormous one-eyed monster cyclops from Greek mythology due to the enormous eye patches in the middle of its hindwing. During its first instar, it is white with transverse black bars at the top and sides of its segment. As it molts in older instars, it transforms into a translucent yellowish-green with a few orange to red lumps at the top of its segment. Larvae in Missouri consume more than 20 different kinds of tree and shrub species. Its preferred habitats for living and feeding include silver maple, birch, hazelnut, and oak. Adults can only survive for a few weeks without eating anything.

The Polyphemus moth, Antheraea polyphemus, is a member of the Saturniidae family, which also includes the giant silk moth. The moth is tan in color and has an average wingspan of 15 cm. The moth’s two large, purplish eyespots on the hind wings are its most distinctive feature. Its name, derived from the Greek myth of the cyclops Polyphemus, is due to its eye spots. Pieter Cramer published the first description of the species in 1776. Local populations of the species can be found all over continental North America, including the subarctic regions of both Canada and the United States. When it emerges, the caterpillar can consume 86,000 times its weight in food in a little under two months. Aside from Antheraea Polyphemus, there is also a strange caterpillar called Imperial Caterpillar . 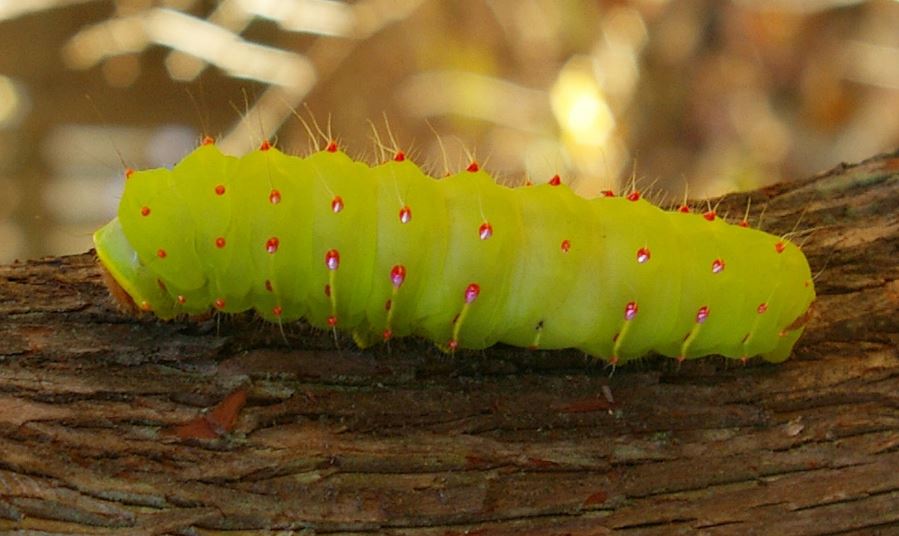 Adults fly from the middle of April until August. a Missouri species with multiple broods. Adults are nocturnal and start looking for partners around 11 p.m. and 1 a.m. Oval in shape, cocoons have a hard outer layer of silk and are typically wrapped in a leaf from the food plant. When the food plant sheds its leaves in the fall, they typically fall to the ground. They occasionally cling to stems and stay there all winter.

The two wide brown rings on the slightly oval, flattened eggs are white, and they are attached to the substrate with a dark brown adhesive.

Eggs, pictures of the first through fourth larval instars in color, and the five larval instars. The first instar is between 5 and 6 mm, the second is between 14 and 15 mm, the third is between 20 and 25 mm, the fourth is between 40 and 45 mm, and the fifth is between 60 mm. The tops and sides of each segment of the first instar larva are white with two transverse black bars. Older instars are yellow-green, and with each molt, the setae become noticeably less pronounced. The full-grown (fifth instar), translucent, yellowish-green to green caterpillars measure 60 to 75 mm in length. On abdominal segments 2 to 7, there are yellow mid-segmental lines that extend from the sub-dorsal scoli touching the spiracles to the lateral scoli. The dorsal and subdorsal scoli’s lateral aspects are silver, and the scoli themselves range in color from orange to red. Segment nine of the abdominal wall is partially covered by the dark anal plate area.

A yellow band that surrounds the dorsal and lateral regions directly behind the head, yellow bands at the bases of the thoracic legs, and a yellow mid-ventral line that runs the length of the abdomen are all features of fifth instars. Male larvae of the fifth instar can be distinguished from female larvae by the presence of a black pit on the ventral side of the ninth abdominal segment, which is absent in females.

Compared to the luna moth’s cocoon, the single-layered cocoon is thicker and more elliptical. The pupa can be seen. By having a longitudinal notch on the ventral surface of the fourth exposed abdominal segment, female pupae can be distinguished from male pupae. Males are lacking in this notch. Additionally, male pupae’s much larger developing antennae touch each other at the mid-ventral line, whereas female pupae do not. A cremaster anchors the pupa to a loosely spun pad of silk at the back of the cocoon to help the adult emerge from the pupal exoskeleton.

Adult wingspan ranges from 10 to 15 cm, or 4 to 6 inches. The upper surface of the wings has transparent eye spots and varies in color from reddish brown to gray to light brown to yellow-brown. Even among specimens from the same locality, the color of the wings varies significantly. Large yellow, white, and black rings are visible around the large hind wing eyespots. On the upper surface, the forewing has pink-edged white ante-medial and post-medial lines, and the hind wing has a post-medial line with a pinkish-white edge and black color. There are pinkish-white and different shades of brown on the undersides of the wings.

Young caterpillars are where parasitic insects, like the parasitoid wasp, lay their eggs. These eventually hatch into larvae that eat the caterpillars’ interiors. When the caterpillars pupate, the larvae also do so, killing the Polyphemus pupa in the process. One known threat to the native Polyphemus moth of North America is the Compsilura Cincinnati tachinid fly, which was brought to the continent to eradicate the gypsy moth. Additionally, it has been documented that squirrels eat the pupae of Polyphemus moths, drastically reducing their population. Tree trimming and leaving outdoor lights on at night can both be harmful to moth populations.

How Antheraea Polyphemus Response To Threats

The Polyphemus moth employs defense mechanisms to keep predators away from it. A distraction display that serves to baffle or merely divert predators is one of its most distinctive mechanisms. This involves the moth’s distinctive name-giving large eyespots on its hindwings (from the cyclops Polyphemus in Greek mythology). Eyespots are a type of distraction pattern known as startling patterns that are used for camouflage through deceptive and blending coloration.

The majority of startle patterns are vividly colored regions on the exterior of animals that are already camouflaged. Distraction patterns are thought to be a type of mimicry used by moths to deceive predators with their wing markings. The Polyphemus moth’s hindwing pattern resembles the great horned owl’s head pattern (Bubo virginianus). This defense mechanism frequently leads to the moth’s wings being damaged, but this does not affect the insect’s ability to fly.