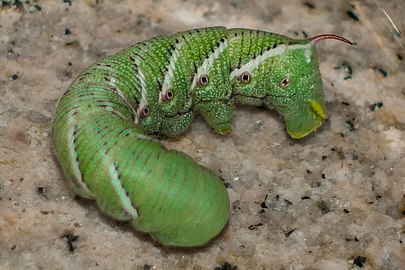 The Tobacco Hornworm, also known as Goliath Worms, has larvae that are about 70 to 80 mm (3.1 inches) long, while the Carolina Sphinx Moth, which ranks fourth on this list, has adults with a wingspan of about 90 to 120 mm (4.72 inches). At the beginning of its larval stage, it has a stunning green iridescent appearance with diagonal white striping markings bordered with black at the upper section of each line. Its bright reddish projection on the final abdominal segment, which resembled a “horn,” inspired its name.

Another name for the tobacco hornworm is Manduca sexta. There are seven world’s largest caterpillars including the Tobacco Hornworm caterpillar. It can be distinguished from the tomato hornworm, which is often mistaken for it, by closely examining its markings, which include a V-shaped marking on the body and a black horn in the tomato hornworm and a diagonal white marking and a reddish horn in the tobacco hornworm.

How To Remember The Tobacco Hornworm Caterpillar

To remember the markings, use the analogy that tomato hornworms have M-shaped markings and tobacco hornworms have straight white lines like cigarettes. Sexta possesses mechanisms for selectively encasing and secreting nicotine, a neurotoxin found in tobacco. M. Due to its easily accessible nervous system and brief life cycle, sexta is a popular model organism, particularly in neurobiology. It is employed in numerous biomedical and biological scientific investigations. It is simple to raise it on a diet of wheat germ. Because the larva is large, it is relatively simple to separate its organs and dissect them. 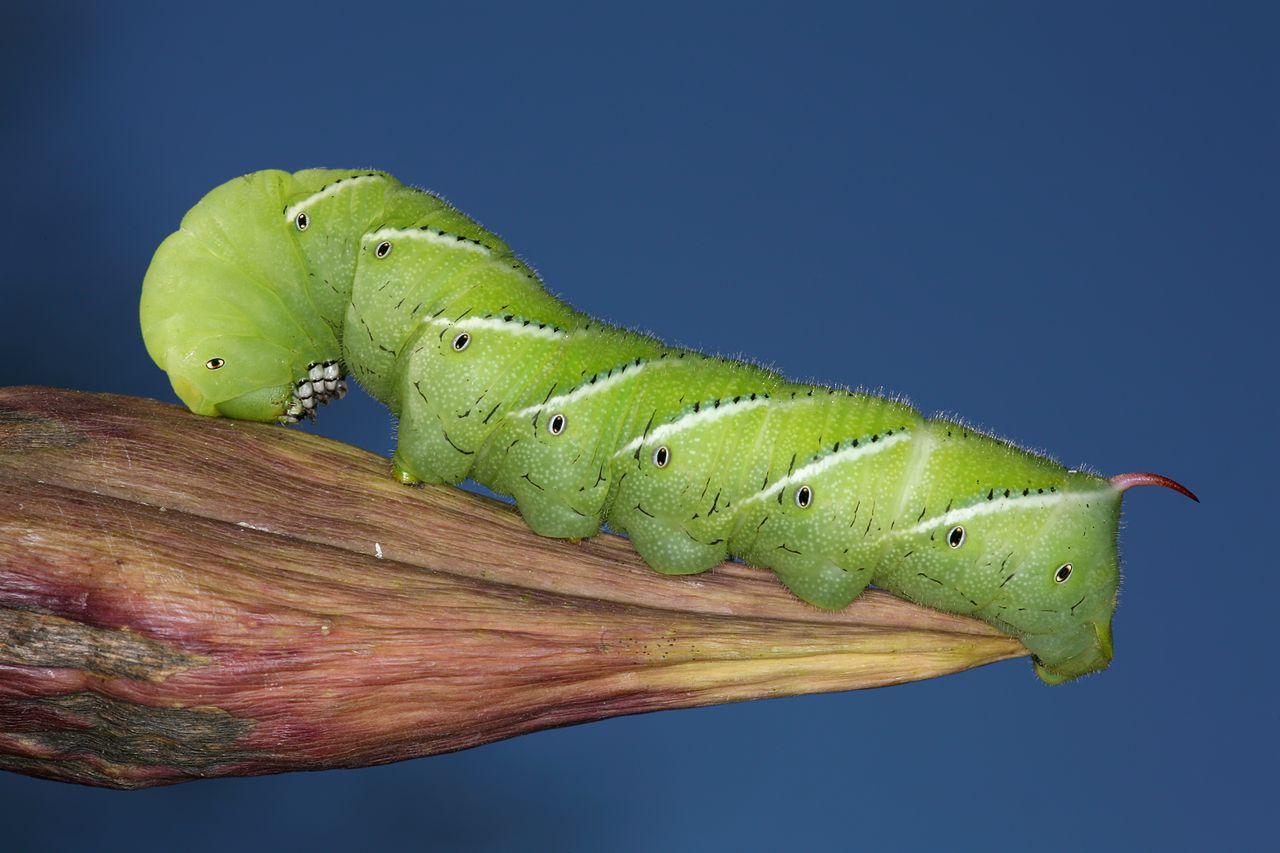 The life cycle of the Manduca Sexta is brief, lasting only 30 to 50 days. Manduca sexta typically has two generations per year, but in Florida, they can have three or four.

Manduca sexta lays its eggs on the leaves of its host plant, where they take one to three days to hatch. The eggs have a diameter of 1 mm, are greenish in color, and have a faint iridescence.

The bright green larvae of the Manduca Sexta can reach a length of 70 millimeters. They are known as “hornworms” because of the dorsocaudal horn at the tip of the posterior abdominal segment. The body of the last instar is cylindrical and covered in tiny setae that resemble hair. Ocelli and chewing mouthparts are present on the head. All larval instars have a pair of prolegs on the third, fourth, fifth, sixth, and last abdominal segments, as well as a pair of true legs on each of the three thoracic segments. There is one pair of spiracles on the prothoracic segment, and there are additional pairs on each of the eight abdominal segments.

The tobacco hornworm’s caterpillar stage resembles that of the closely related tomato hornworm quite a bit. However, the lateral markings on these two species’ larvae make them easily distinguishable. in particular, the M. The horn of the Sexta caterpillar is red or green with a red tip, and the first seven abdominal segments have seven white diagonal lines with a black border. The M. All eight of the abdominal segments of the quinquemaculatacaterpillar have V-shaped white markings with no borders, and the horn is either dark blue or black in color.

The larva goes through a stage called the pre-pupa, where it drastically reduces in size and gets ready to pupate, before it actually does so. Frequently, individuals confuse this stage with a dead or dying caterpillar.

Manduca sexta adults have slender wings with a wing span of roughly 100 mm. Manduca Sexta moths are remarkable hoverers and are nectarivorous, feeding on flowers. Also, there is the world’s largest caterpillar that might freak you out or not so it is better to learn that.  Adults have different sexual types. The claspers at the end of the abdomen and the larger antennae of males serve as indicators of their gender. Female moths typically only mate once, about one week after eclosion. Males can have multiple matings. The male and female are typically facing in opposite directions, touching at their posterior ends, during mating, which typically takes place on a vertical surface at night and can last several hours. Females lay their fertilized eggs on vegetation after mating, typically on the underside of leaves.