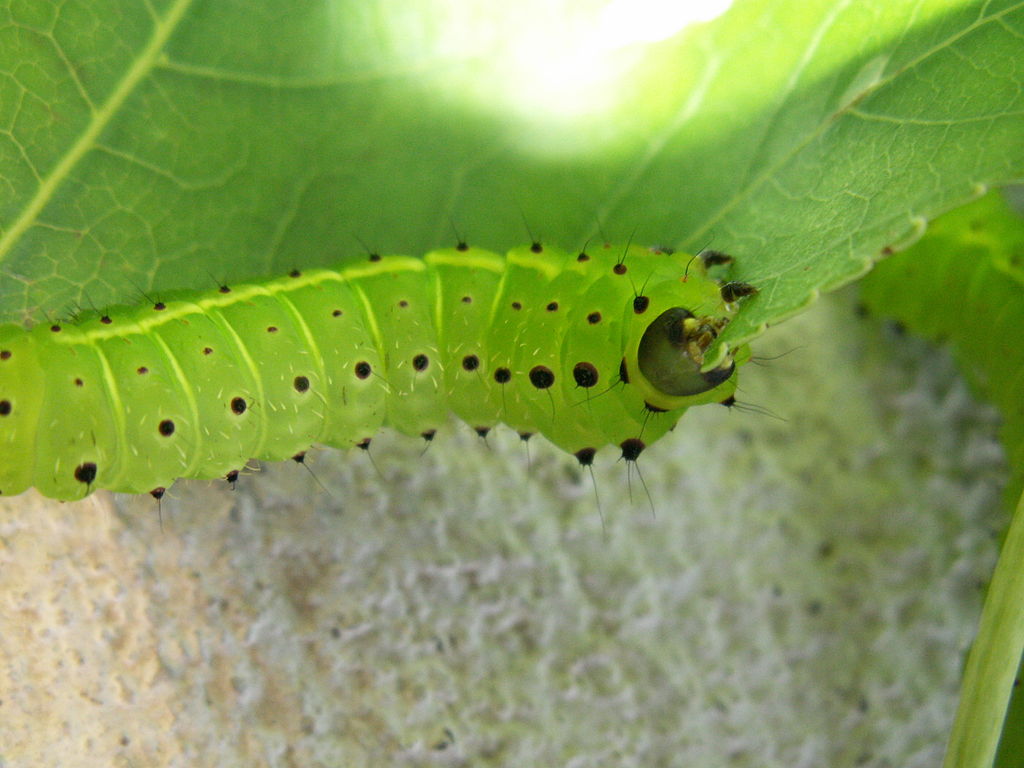 The Luna moth (Actias luna), also called the American moon moth, is a Nearctic moth belonging to the subfamily Saturniinae of the family Saturniidae, or giant silk moth family. This caterpillar is included in the world’s seven largest caterpillars. The fantastical insect known as the American moon moth is widespread in North America. It comes in at number five and measures roughly 55-70mm in length. A fully grown caterpillar is a bright green color (luminous). This caterpillar is exceptional because, unlike those of other species, its larvae are not poisonous. There are no chemical components on its spine or setae in its thoracic abdominal region, according to some studies. This species of animal lives in trees and consumes a lot of nuts, sweetgum, paper birch, hickory, and other types of tree leaves.

Eggs are 1.5 millimeters in diameter, mottled white and brown, and attached in small groups to the undersides of leaves. The majority of the larvae are green and have few hairs. The length of the first instar, which emerges from the egg, is 6-8 mm, followed by the second instar at 9-10 mm, the third instar at 12-16 mm, the fourth instar at 23-26 mm, and the fifth instar at about 70-90 mm. The sides of the fourth and fifth instars may be lined with tiny, vibrant yellow or magenta dots. Prior to cocooning, the larvae may turn reddish-brown in color. Fifth-instar larvae crawl to the ground and wrap the cocoon in dead leaves using silk.

Similar in size and appearance to males, females have green wings, eyespots on both the fore and hind wings, and long, occasionally slightly twisted tails that extend from the back edge of the hindwings. White and hairy bodies. Adults do not eat and have rudimentary mouthparts. Fat reserves that were built up while a caterpillar provides energy. The forewing’s leading edge is thick and dark in color, and its thickness decreases from the thorax to the wing tip. Its hue can be anything from brown to maroon. Each wing has one eyespot, which is round on the hindwings and oval on the forewings. Arcs of black, blue, red, yellow, green, or white are possible for each eyespot. Potential predators are believed to be confused by the eyespots. 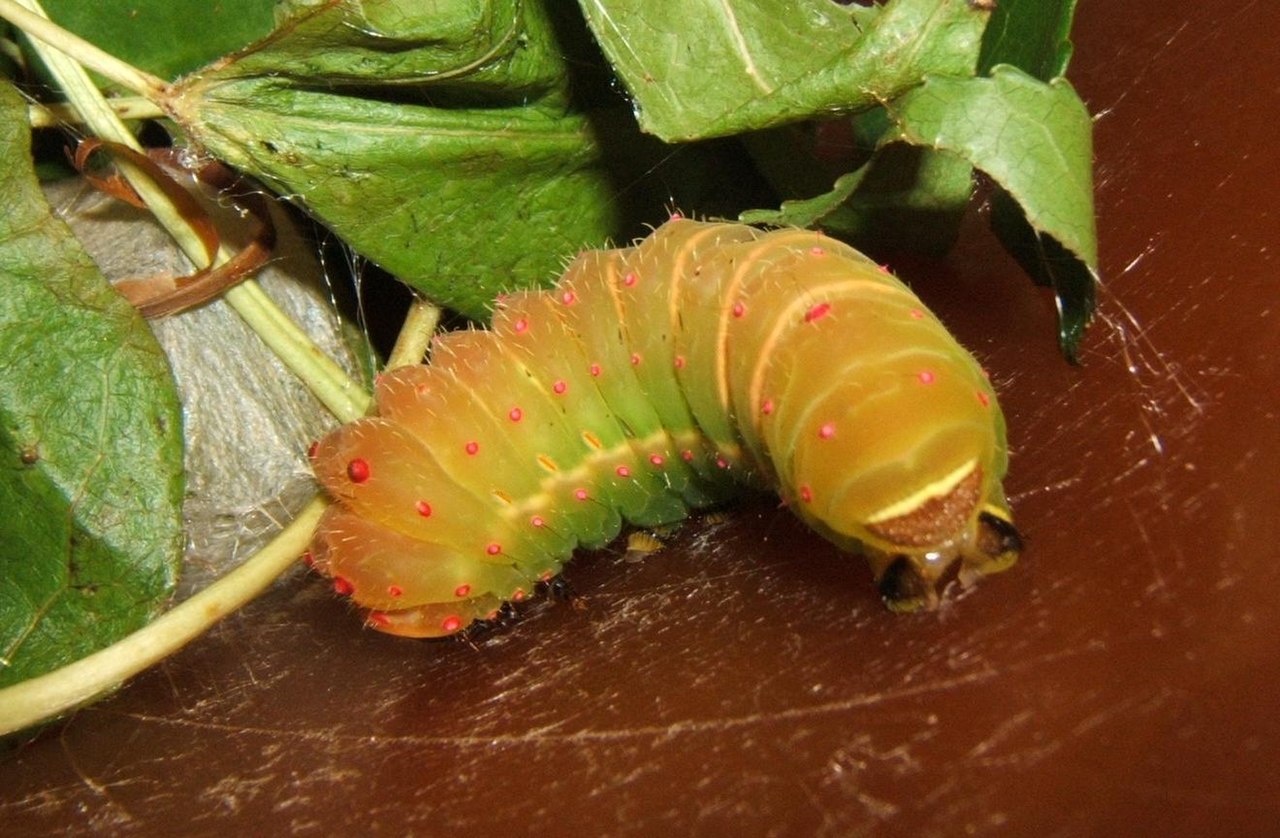 The number of generations that a Luna moth produces annually varies depending on the climate in which it is found. They are univoltine, or have one generation per year, in Canada and the northern United States. The life cycle lasts about 10 days for eggs, 6-7 weeks for larvae, 2-3 weeks for pupae, and one week for winged adults, which emerge in late May or early June. The species has two or three generations per year depending on where you are in the mid-Atlantic and farther south. The first generation debuts in the central states in April, followed by the second in July. The first generation can be seen as early as March further south, with the second and third appearing eight to ten weeks later.

Females lay 200–400 eggs on the underside of the leaves of the larvae’s preferred tree species, either singly or in small groups. Following successful mating, egg laying begins that evening and lasts for several days. Eggs usually hatch after a week.

The time between molts, or an instar, typically lasts between 4 and 10 days. Before a cocooning, there are five instars. A small amount of silk is placed on the main vein of a leaf at the end of each instar, after which the larva goes through apolysis and then ecdysis, leaving the old exoskeleton behind. The shed exoskeleton is occasionally consumed. This caterpillar, which has just hatched, is constantly munching on the leaves of paper birch, walnut, hickory, and sweetgum trees. Although each instar is green, there is some variation in the first two instars, where some larvae have black underlying splotches on their dorsal side. The final instar reaches a length of roughly 70 to 90 mm. This species lives in trees.

The larvae remain on the tree where they first emerged until it is time to make a cocoon on the ground. Females leave their cocoons and fly to their preferred tree species, where they release pheromones and wait for males to find them. Although some members of the Saturniidae family are known to be poisonous, Luna’s larvae are not.

After spinning a thin, one-layered silk cocoon, the Luna moth pupates. The final, fifth-instar caterpillar will perform a “gut dump” where any extra water and intestinal contents are expelled just before pupation. This species’ pupae are more energetic than most moths’ pupae. The moths make noise when disturbed by wriggling inside their pupal cases.

Unless the person is in diapause during the winter, in which case the pupal stage lasts about nine months, pupation takes place in about two weeks. Diapause is typically brought on by a combination of temperature, length of sunlight exposure, and genetic triggers. Near the base of the forewings, the pupae have chitinous spurs.

After receiving signals from the outside world in the form of temperature changes, pupae change into a winged state. The abdomens of the adult Luna moths are swollen and their wings are small, wet, and soft when they emerge from their pupae. During the first few hours of adulthood, hemolymph is pumped from the abdomen into the wings. Before being able to fly, the moths must wait for the wings to dry and harden. This procedure can take two to three hours to finish. If you admire this animal, for sure you will also like the five most photogenic animals in the world.

Due to their extremely short (7–10 day) adult lives and nocturnal flying habits, luna moths are not uncommon, but they are rarely observed. As with all giant silk moths, the adults do not eat in their adult forms and instead rely on the energy they accumulated as caterpillars because they only have vestiges of mouthparts and no digestive system. In regions with two or three generations per year, the second and third generations may have wings that are more yellow-green than the year’s first.