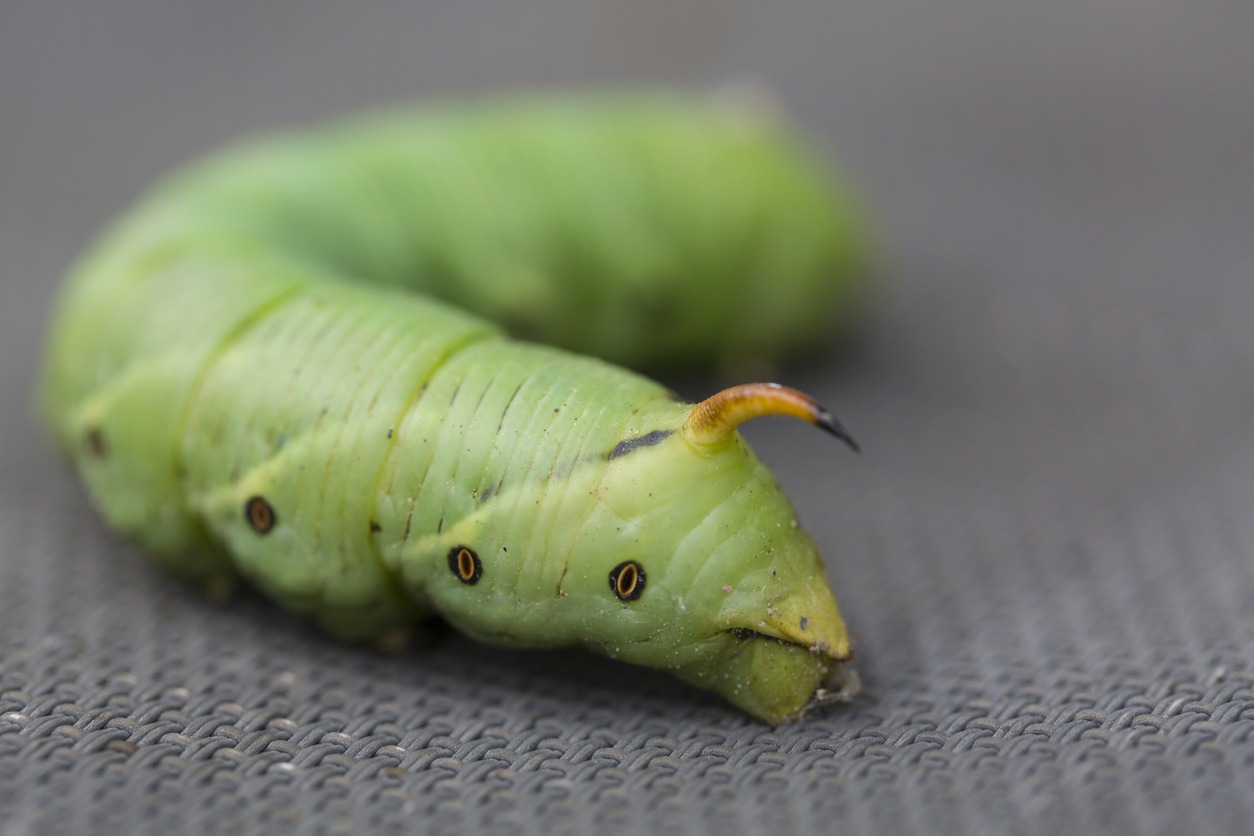 The hickory horned devil is a blue-green caterpillar with long black thorns that is about the size of a large hot dog. On the leaves of deciduous forest trees like hickory, pecan, sweetgum, sumac, and persimmon, they have frequently observed feeding. The hickory horned devil has been eating nonstop for about 35 days, gaining weight every day. They descend to the ground to look for a suitable spot to dig a tunnel into the soil to pupate between late July and mid-August. Despite their intimidating appearance, hickory horned devils are completely benign. Move it to an open soil surface if you see one wandering through the grass or across the road.

One of our biggest and most impressive moths is the Citheronia regalis (Fabricius), also known as the regal or royal walnut moth. There are seven world’s largest caterpillars and one of which is the Hickory Horned Devil. It is nocturnal like the majority of moths, though it is occasionally seen at lights. When the imposing larva, also known as the “hickory horned devil,” is fully grown and emerges from the trees to wander in search of a place to pupate, this is when it is most frequently seen.

The pupa will remain dormant until late May or early June of the following year when they will fully transform into a regal moth or Citheronia regalis. It is nocturnal, like most moths. The wings of this enormous gray-green moth, which can reach a width of 6 inches, are orange. It only lasts for about a week and never eats. They even have a mouth that works. After emerging from the ground, adults begin mating on the second evening, and on the third evening at dusk, they start laying eggs on tree leaves. The adult moth dies of exhaustion. Within six to ten days, eggs hatch. The regal moth is a native of the southeastern United States, as is the hickory horned devil, which is the name of the larval stage. They only cause minor harm to trees. We can all benefit from learning to appreciate this “odd” creature.

Chickens, which typically eat caterpillars, aren’t safe from the bluff of hickory-horned devil caterpillars. The world’s largest caterpillar may freak you out or may not. Although they appear to be enormous and able to consume a mouse for lunch, they are actually just some large, old, harmless babies who wouldn’t harm a flea. Given that they are typically between 5 and 6 inches long, it is understandable why a chicken might feel a little uneasy about taking one on. However, this big, obnoxious sucker will eventually develop into a huge, vibrant regal or royal walnut moth. Even those ominous, long red horns with black tips are just a ruse; they don’t even sting. You should feel free to pick up any of these bright green caterpillars that you see because they are actually quite manageable.

Contrary to most other caterpillars, the hickory horned devil spins a cocoon. Instead, they descend into the soil where they mature into moths. One of these caterpillars won’t likely be visible to you until he descends from a tree in search of a place to pupate. You can assist one of them by picking it up and moving it to a location where the soil is soft enough for burrowing if you happen to see it on the pavement or anywhere else where it would be challenging to do so. 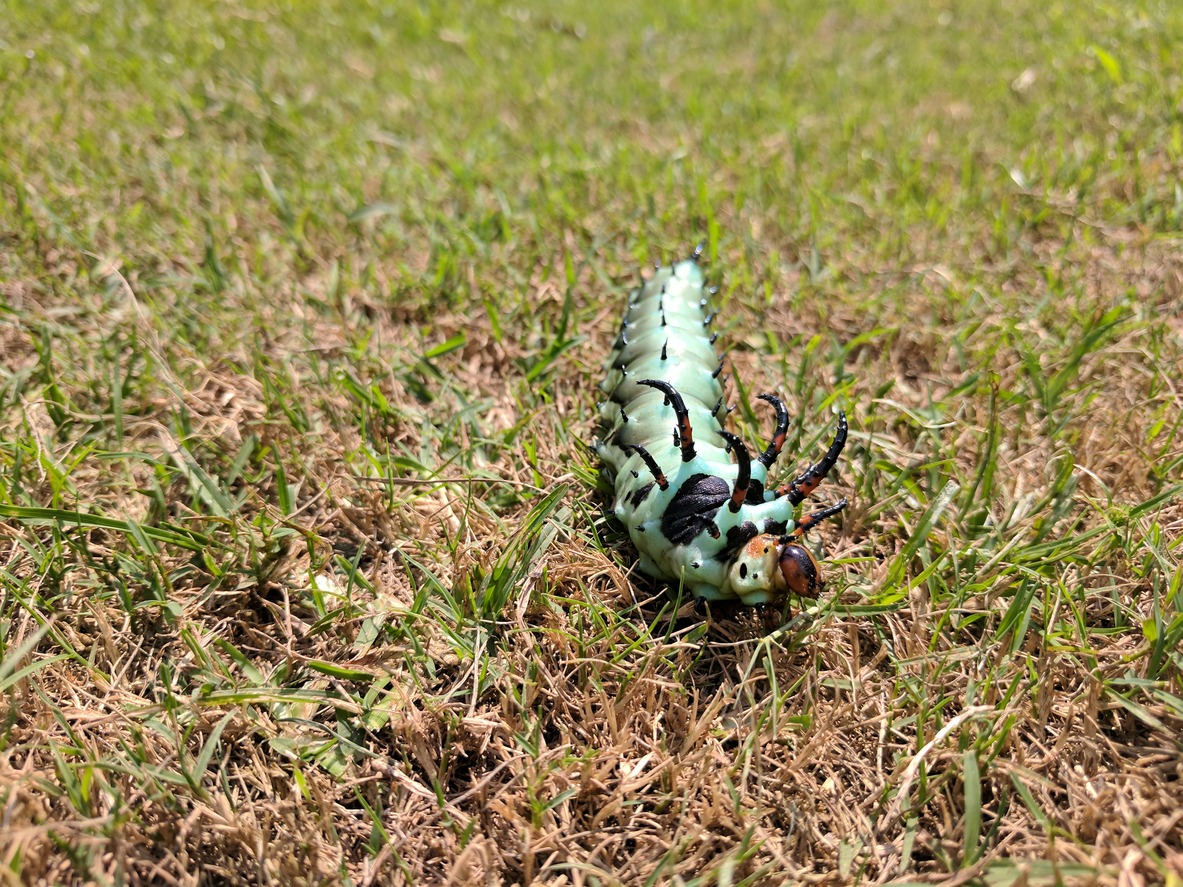 These caterpillars enjoy congregating in a variety of trees, including hickory, ash, persimmon, sweetgum, sycamore, and walnut. The damage caused by a hickory horned devil caterpillar to shade tree leaves is usually minimal because of their low population. A female regal moth will spend the majority of her remaining life laying eggs, depositing them on leaves in clusters, after mating when she first emerges from the soil in the summer. The four larval stages—embryo, larva, pupa, and imago—begin to develop after the eggs hatch after about 15–16 days. These caterpillars have ravenous appetites in the last stages.

What Will Happen If You Disturb Them?

A hickory horned devil caterpillar will attempt to scare you away if you disturb it by flinging its body from side to side, but this is all in play and they are not dangerous. The caterpillar will bury itself in the ground to pupate and overwinter in the late summer to early fall. Although some pupae take almost two years to develop into moths, the majority will stay as pupae for a little less than a year on average. These caterpillars are generally not regarded as pests, though their populations do appear to be declining. They can withstand a very light frost and will keep feeding as the weather warms up, but since there are so few of them, no pest control is advised.

In particular, leaves from hickory-type trees like walnut, pecan, buttonbush, filbert, ash, and others are what Hickory Horned Devil Caterpillars prefer to eat. Persimmon leaves are also a favorite.

Where Do They Live?

The eastern U.S.’s deciduous forests are home to the Hickory Horned Devil Caterpillar. They used to reach as far north as Massachusetts, but they now only make it as far as New Jersey. They are more prevalent in the south, reaching as far east as central Florida and as far west as eastern Texas.

They take about a week to hatch from the eggs, and the larvae have a lifespan of about five weeks, usually between late July and the middle of August. In order to have enough energy for their pupation and final transformation, they eat leaves. When they live in dark brown cocoons, they eat a large meal right before they begin searching for soft earth to burrow into for pupation.

Why Do Hickory Horned Devil Caterpillars Gorge Themselves Before Pupation?

They never eat again, just like moths, so this is their last meal ever. Even their mouths are incapable of absorbing nutrients. Additionally, depending on when the pupa senses the conditions are right for its emergence, pupation may last one season or even two.

What Kind Of Moth Does Horned Devil Caterpillars Become?

The regal moth, the largest moth found north of Mexico, has a larva called a horned devil caterpillar. It has four to six-inch wide wings that are gray-green and orange. This lovely moth has a short lifespan of about a week, during which it makes every effort to mate and produce offspring before eventually passing away from exhaustion.