Eacles imperialis imperialis (Drury, 1773) is the scientific name for the largest and most attractive moth we have. Of our large eastern U.S. saturniid moths, it is also the most variable in appearance and has the greatest distribution. There are seven largest caterpillars in the world including the Imperial Caterpillar or Eacles Imperialis.

More Description About The Eacles Imperialis

An adult’s wingspan ranges from 80 to 175 mm (3+1/8 to 6+7/8 inches). The variety within this species is substantial. The adult’s coloring can differ noticeably on this, but it is always primarily yellow with red, brown, and purple blotches. This species has both light and dark morphs, and they can be found in both the northern and southern parts of their range. Northern individuals may have fewer dark markings than those from other parts of their native range.  In the first instar, larvae are small (roughly 10-15 mm long), orange with black transverse bands, and large spines. Aside from this caterpillar, there is the world’s largest caterpillar that may freak you out. By the fifth instar, they are 3-5.5 inches (75-100 mm) long with long hairs and shorter spines, and their color morphs range from dark brown and burgundy with white spiracle patches to green with yellow spiracle patches.

Caterpillars are light blue-green in color and covered in short, stiff hairs. They can also be tan or dark brown. The lower body is hunter-green in color. The body’s spiracles, or breathing holes, are broad, stark white, and rimmed in both aqua and black. Just behind the head, there are two shorter, sharper spines and four long, sharp, deep yellow spines. The head is orange-yellow, and in the middle, it has a black inverted Y. Spruce, pine, oak, maple, sycamore, cherry, birch, alder, elm, sweet gum, sassafras, beech, cedar, and walnut are just a few of the trees and shrubs that larvae eat. After about 42 days in the larval stage, the insect burrows into the ground to become a pupa and spend the winter. 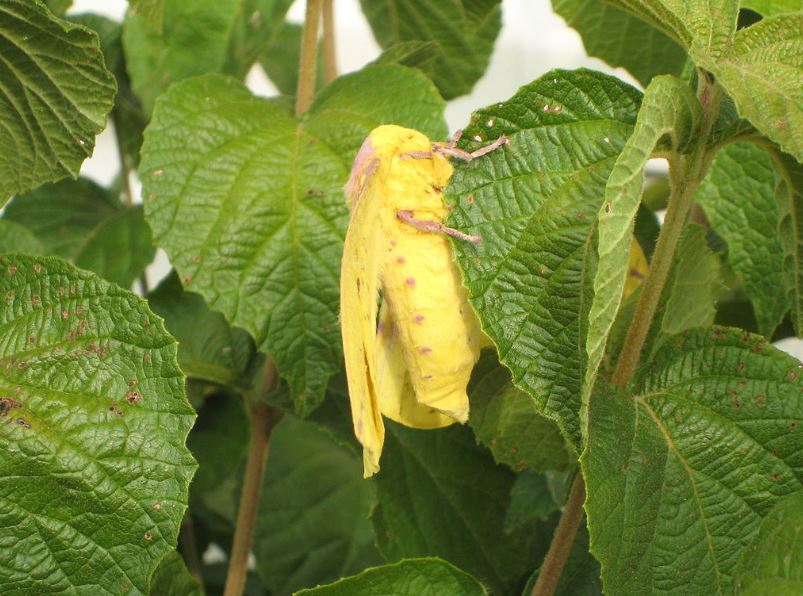 Adults frequently break out in May or June. The brightly colored female moth has reddish-brown freckles all over her body. Each forewing has two little reddish-brown circles, and each hindwing has one. Two bands are on the forewings, and a wavy band of the same color runs across the lower wing. Males’ forewings are almost entirely red, with the exception of a small patch near the bottom and a triangle at the tip.

From Argentina to Canada and from the Rocky Mountains to the Atlantic Coast, imperial moths and their numerous regional morphs, subspecies, and related species are found. The most widespread and northernmost species in the genus Eacles is this one. Historical records of Nominate Eacles imperialis imperialis range from New England and southern Canada, south to the Florida Keys, and as far west as Nebraska. The only population of Imperialis in Massachusetts today is on Martha’s Vineyard, and the true northern limits of the nominate’s range are unknown due to potential overlap with subspecies E. i. pini in the current record. species of E’. i. On the northern borders of the New England and Great Lakes States and further north into Canada, pini grows in coniferous and transition zone woodlands. It is replaced by the closely related E in the southwest. oslari. Mexico and South America both contain additional subspecies. species of E’. i. In Brazil and the surrounding areas, magnifica can be found.

One of the few saturniid species in the northeastern US that is experiencing a regional decline is Eacles imperialis, which has been absent from records in some New England states for many years. The use of pesticides, insecticides, and herbicides in commercial farming, metal halide street lights, and the introduction of parasitoids in an effort to control the gypsy moth population have all been suggested as causes of the decline. In the Deep South, Appalachia, the Ohio Valley, and the middle Atlantic states, Eacles imperialis is unquestionably a common species that inhabits forested, rural, and suburban habitats. The possibility exists that E. imperialis needs a particular habitat, and the increasing fragmentation of niches, like coastal or montane pine barrens, is a contributing factor.

Every year, there is only one brood. Larvae of the imperial moth are known to feed on a variety of hosts. There may be regional variations in food preferences, though. The imperial moth’s most frequently reported plant hosts are the following: pine, maple, oak, sweetgum, and sassafras species.

At dusk, the female will lay eggs. On either side of a leaf from the host plant, it will do this either alone or in groups of two to five. In between ten and twenty days, the eggs begin to hatch. Larvae that have just hatched will consume the eggshell from which they came.

Much darker than larvae in the first instar. Scoli have smaller bodies than average. This instar’s body is starting to sprout fine hairs.

Scoli keeps getting shorter as body size grows. The color of your head’s pigment darkens.

Scoli keeps getting smaller. This instar’s hair is now much longer. Color gradation starts to develop.

At this instar, larvae are about 3-5.5 inches (75-100 mm) long and fully grown. They can come in a wide range of color morphs, but dark brown, burgundy, or green individuals are the most prevalent. In dark brown morphs, the region surrounding the spiracles is white; in green morphs, it is yellow. Burnt orange patches may run dorsally and surround the spiracles on the sides of dark brown morphs. The larvae will tunnel into the ground to pupate at the conclusion of this instar.

Adult wingspan can range from three to seven inches (80–174 mm). Once a year, adults will come out to mate. Sunrise is when emergence occurs, and the following night is when mating takes place. They typically emerge in the middle of summer (June to August) in the northern part of their range, whereas they typically emerge at different times in the southern part (April–October). Males typically emerge days before females do. After participating in a mating event, a pair becomes more vulnerable to predators, especially foragers. The adults of the Saturniidae do not eat. Their mouth areas have shrunk.