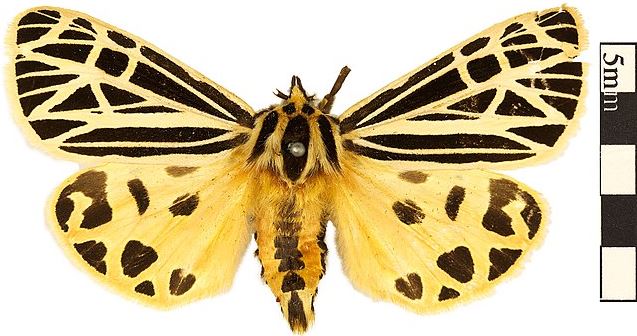 Numbering at over 160,000 species worldwide, moths are some of nature’s most important pollinators. Moths belong to the Lepidoptera insect order, and moths make up 89-94% of the species.

The modern English word moth comes from Old English moððe (cf. Northumbrian mohðe) from Common Germanic (compare Old Norse motti, Dutch mot, and German Motte all meaning ‘moth’). Its origins are possibly related to the Old English maða meaning ‘maggot’ or from the root of midge which until the 16th century was used mostly to indicate the larva, usually in reference to devouring clothes.

The differences between moths and butterflies

Moths are insects that are closely related to butterflies. Although moths closely resemble butterflies, there are differences between moths and butterflies. The distinguishing feature is the antennae.

The antennae are shaped differently with club-shaped antennae with a bulb on the ends. Moths have a feathery look with a jagged edge. Typically butterflies are more colorful, although many moths have beautiful colors. Moths shed scales that look like a powdery substance on your fingers if you touch them. It is natural for this shedding and does not affect the lifespan of the moth.

Moths generally fly at night, but some species do fly during the daytime. They also fold their wings differently. Butterflies fold them toward their backs, and moths fold them over their abdomen. The life cycle is similar, with one significant distinction in the transformation process. A moth caterpillar will build its cocoon out of silk-like substance. The butterfly caterpillar builds a hard chrysalis.

Moths are believed to have more than 160,000 species with most of them yet to be adequately described or appropriately named. The most famous moths include the Atlas Moth which is the largest in the world. The White Witch Moth which has the longest wingspan, reaching close to 12 inches. The Madagascan Sunset Moth is considered to be the most beautiful Lepidoptera.

Butterfly species are way fewer compared to moths; there are about 17,500 species in the wild. Some of the most known species include the Monarch butterfly which is known for traveling long distances of more than 3,000 miles during their migration. The Blue Morpho is easy to spot thanks to their bright blue wings that stretch for more than 8 inches. The Luzon Peacock Swallowtail has colorful patterns on its wings that end in a shape of the tail. The Dead Leaf butterfly boasts one of the best camouflages in the wild; this butterfly does not move around much instead stays motionless mimicking the appearance of a dried dead leaf.

Why butterflies and moths are important

Moths pollinate flowers while feeding on their nectar, and therefore help in seed production. This includes wild plants, garden plants and food crops. Moreover, moths play a vital role in telling us about the health of our environment. They are widespread, found in many different habitats and sensitive to change.

10 of the largest moths in the world as measured by their wingspan. 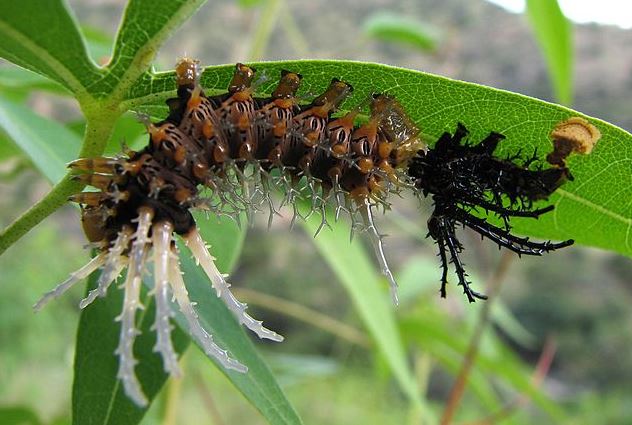 You can find this royal beauty along the north edge of Mexico and the lower parts of the United States. The mating season is a short July-August, having groups of 1-4 eggs at a time laid on a host leaf.

They are dark grey with red veins and white markings and prefer the tasty leaves of the wild cotton, manzanita, New Mexico evergreen sumac, and squawbush.

They will burrow in underground chambers in September for the pupa stage of the life cycle, re-emerging as a moth. 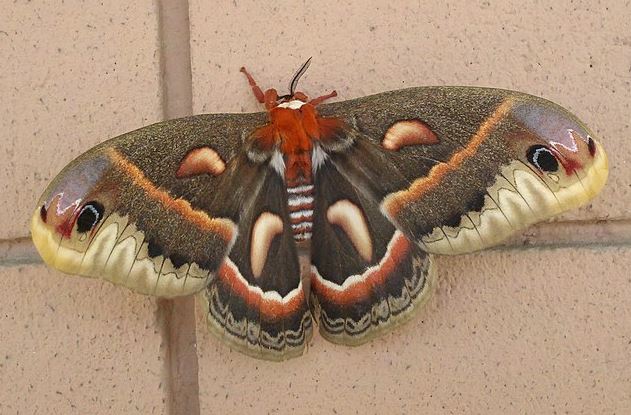 A beautiful specimen adorned with red, white, and yellow wings, black “eye” markings, and a frosted appearance on the wings. The abdomen has bands of red and white. This moth has a wingspan of 5 ⅞ inches and an adult lifecycle of 2 weeks.

Found East of the Rocky Mountains, these moths like the forests in the United States and Canada. The bolas spider can mimic the pheromones of a female cecropia and will use the scent to draw male moths into their webs. The moths mate from March-July and, in specific areas, will mate May-June, then repeat two weeks later. 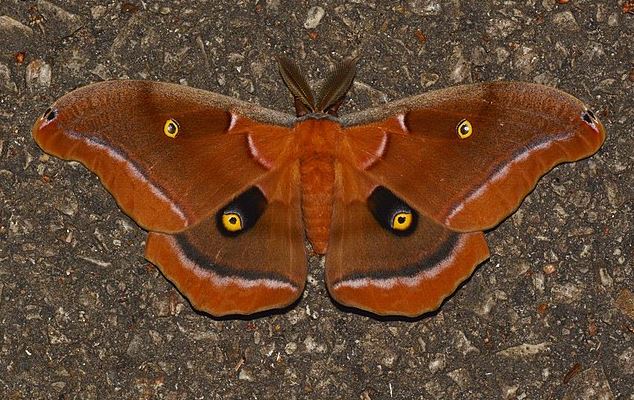 Reaching a wingspan of nearly 6 inches, the Agapema family has two very similar species. The Agapema oculea is tan with orange, blue, and black eyespots. There is a marginal black line, and there may be a yellow or red tint to the body. The Agapema polyphemus is reddish or yellowish-brown, while the underside has pink, brown, or rust markings. 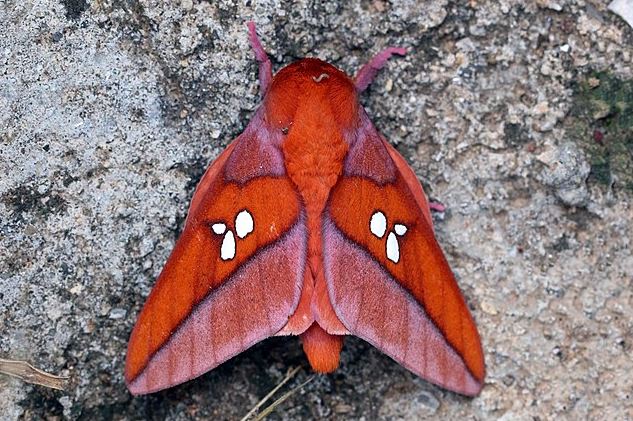 The color variations go from shades of brown, orange and yellow forming “eye spots” in the polyphemus moth to bright green with pink/brown spots and tails on the hind wings in the luna moth, to dull, waxy green with rows of orange, yellow, or blue adorning the wings in the Columbia silk moth, to a brighter colored cecropia moth.

Each of these produces silk that is harvested and used in silk production in Asian and South American cultures. The colors vary from white silk to light brown, silvery brown, and brown, respectively.

These silk-producing moths have a wingspan of up to 6 inches and are native to deciduous rain forests and wooded areas. When it is mating time, the female moth will release pheromones for only 2-3 hours, attracting males from several miles away. 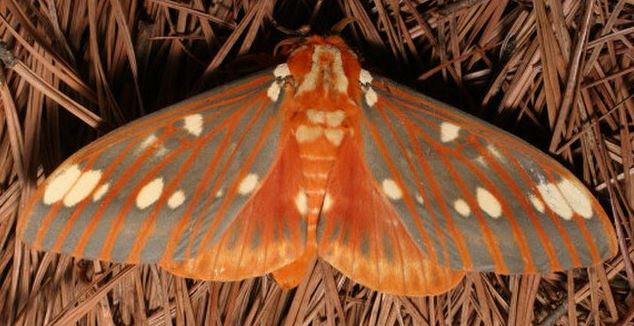 The Royal Walnut Moth reaches up to a 6 ¼ inch wingspan, and the larva has its own name, the hickory horned devil. This moth is native to the Southeast regions of the United States. An exciting coloring, the moth has grey-green wings with orange striping and a series of yellow dots. The body is orange with narrow yellow bands. This is a considerable change from the blue-green color of the moth in its caterpillar stage.

Mating only one generation per season, these moths prefer to lay their eggs on walnut, butternut, or hickory tree leaves. They will also use the leaves of persimmon, sweetgum, and sumacs. Some scientists believe that the larvae grow faster and larger on persimmon leaves. 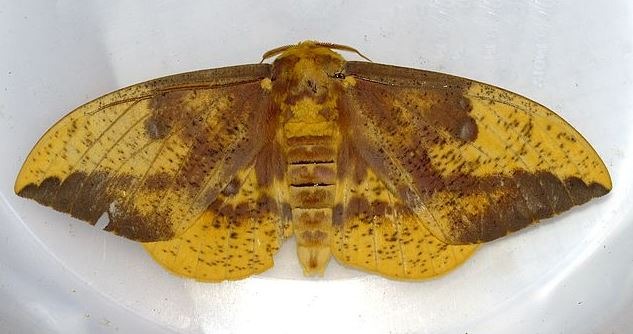 The imperial moth or Eagles imperialis is primarily yellow with pink/purple-brownish patches and spots. Its wingspan can be as large as 6 ⅞ inches. The adults do not feed. They take flight after sunrise and will mate after midnight on the same 24-hour cycle. The females lay their eggs on a leaf, sometimes a single egg, or in groups of 2-5 eggs. It takes about two weeks for the eggs to hatch.

Most Imperial Moths emerge in late summer. This timing helps with their natural defense against predators. Their colors allow them to blend in with falling leaves that often share similar colorings. The moth is commonly found on the forest floor with the leaves. When you see these moths collected near lights, it will likely be the females who have already mated and laid their eggs.

It is very unusual to find one of these mammoth-sized moths. The wingspan is measured at 9.8 inches and is said to be the heaviest moth globally, weighing in at just over an ounce. These moths exist along the coast of Queensland and New South Wales. Attracted to the softwood of a eucalyptus, the larval stage ranges from 1-3 years and has a purple and white banding. This coloring goes away as they mature.

The adult is grey and has a short life cycle, living only a few days before laying eggs and dying. The females do not eat and survive on reserves stored up while in the larva stage. The females do not fly well, so they are found resting on tree trunks or wooden objects like fence posts. 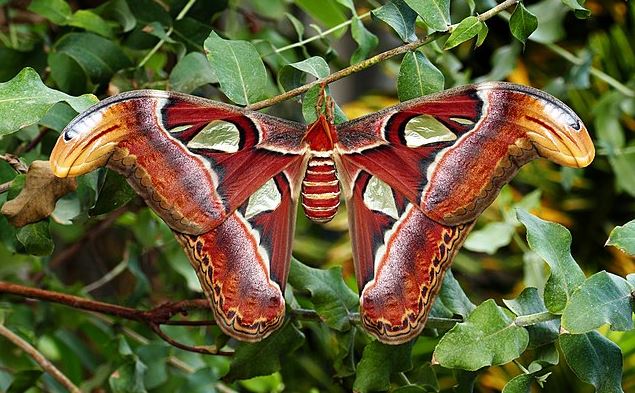 If you are in Southeast Asia, you might run across an Atlas Moth. An intimidating wingspan of 10-12 inches brings this moth near the top of our list. The intricate colors and patterns on the wings include reddish-brown with white, black, pink, and purple designs. The underside is paler in color.

It is thought that these moths have a defense against predators strategy built into their colorful pattern. The tips of the wings resemble the heads of snakes, which would ward off enemies. During the caterpillar stage, they will spray secretions much like skunks when predators are nearby. 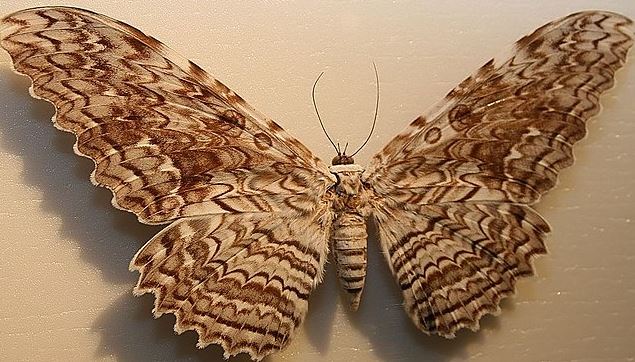 Native to South America, Mexico, and Texas, the White Witch has a wingspan of 11.4 inches. A rare sight, primarily due to its ability to blend in with trees, the White Witch has a zigzag pattern with shades of brown, black, or grey. This beautiful moth is also called Birdwing Moth, Ghost Moth, Great Owlet Moth, and Great Grey Witch Moth. The life of a White Witch is 1-2 weeks. 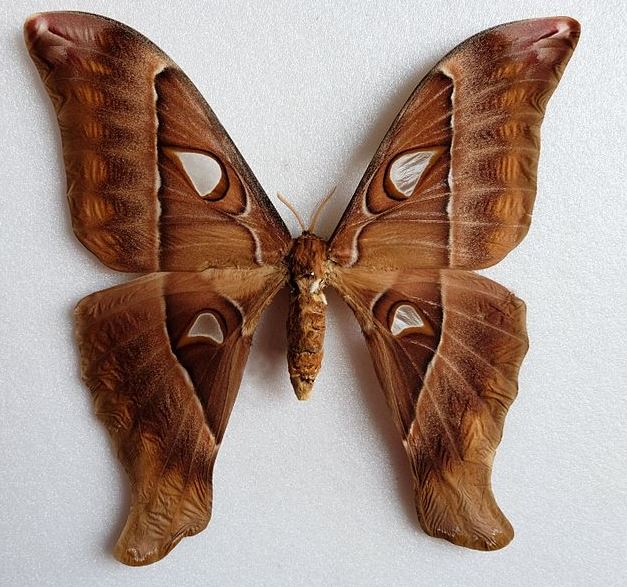 This impressive species has a wingspan of 10.6 inches, with females growing up to 14.2 inches. That wingspan of over 14 inches makes Hercules moths the largest moth species in the world! They are located in North Queensland and New Guinea. The life span is a short 2-8 days since they do not have usable mouths to feed. They live long enough to mate and lay eggs.

In the caterpillar stage, the Hercules Moth grows up to 5 inches long and has fake eyes at the rear end to confuse its predators. Despite the short lifespan of this moth, they can live up to 2 years in the cocoon stage.

Special mention in terms of over-all size, length, and rarity

The world’s largest moth, in terms of overall size, is the atlas moth found natively in southeast Asia. Their wingspan alone is 30 cm (12 in), and are often mistaken for birds. They have no mouth, and therefore live for about 4 days, relying on fatty deposits. <br />

The Hercules moth (Cosdinoscera hercules) of tropical Australia and New Guinea has a wing area of up to 263.2 cm² (404/5 in²) and a wing span of 280 mm (11 in). Males also have a long swallowtail which makes them the largest in terms of length. In 1948 an unconfirmed measurement of 360 mm (14 1/5 in) was reported for a female captured near the post office at the coastal town of Innisfail, Queensland, Australia.