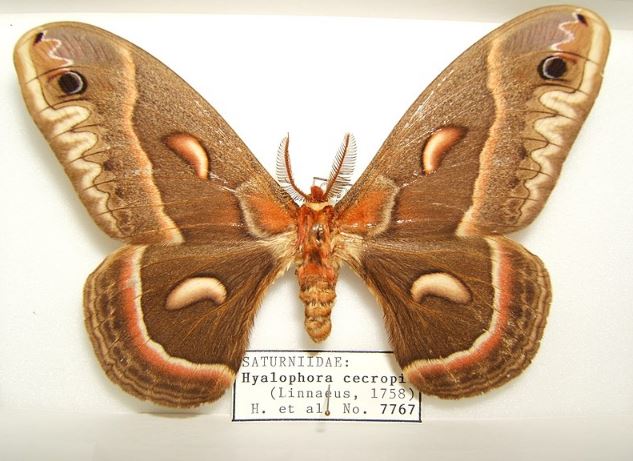 The Cecropia Silk Moth is a stunning specimen with wings that are red, white, and yellow, as well as black “eye” markings and a frosted appearance. Red and white bands can be seen on the abdomen. This moth has a 2-week adult lifecycle and a 5 7/8 inch wingspan. These moths, which can be found East of the Rocky Mountains, resemble the forests in North America. The bolas spider can imitate a female cecropia’s pheromones, and it will use the scent to entice male moths into its webs. The moths breed from March to July, and in some areas, they will breed in May and June and then again two weeks later.

More About The Cecropia Silk Moth 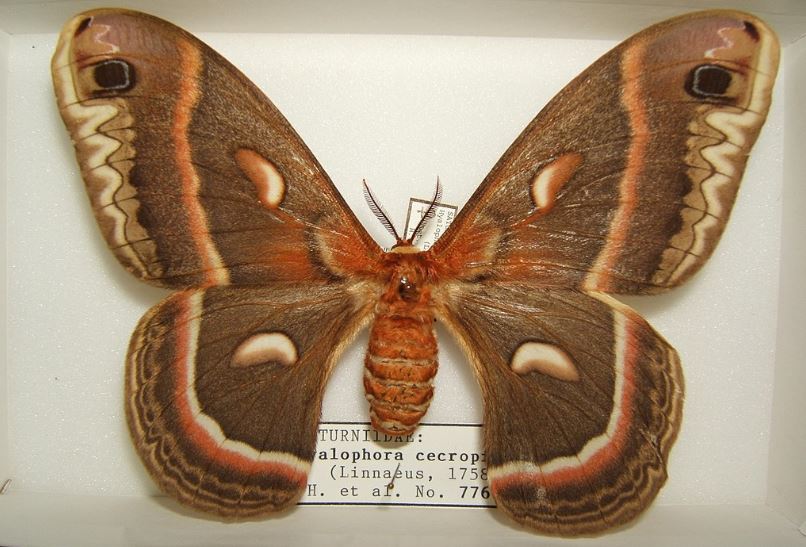 The largest native moth in North America is called a Hyalophora cecropia, or cecropia moth. It belongs to the Saturniidae family, which also includes giant silk moths. This kind of moth is one of the biggest moths in the world. Females have been observed to have wingspans of at least five to seven inches (160 mm). These moths are widespread across North America, reaching as far west as Washington and as far north as most of the provinces of Canada. The cecropia moth larvae can be found on many different types of trees, but they are most frequently found on maple trees. Carl Linnaeus first described the species in his 10th edition of Systema Naturae, published in 1758.

Cecropia moth adults resemble butterflies but have thick, hairy bodies and feathered antennae. The white “collar” and white bands on the abdomen are attached to a red body. The wings are dark brown or gray overall, with a reddish patch at the base of each forewing, when viewed from above. Each of the four wings has a reddish-rimmed, whitish crescent in the middle of it. Red is used to outline the postmedian line’s outer margin, which is the bold line that parallels the wings’ outer edges.

Larvae are enormous and bluish green in color. Two rounded, reddish-orange tubercles with black points can be seen at the top of the second and third thoracic segments. A double row of yellow tubercles is located on top of the abdominal segments. Rows of blue tubercles can be seen along the sides. In addition, the Cecropia caterpillar is included in the world’s seven largest caterpillars.

Habitat and Conservation of Cecropia Moth

Cecropias are most frequently found where open spaces and forested areas converge. Cecropias can be found almost anywhere in our state thanks to their wide range of host trees. For instance, maple trees thrive in yards and parks while also making up a sizable portion of the state’s natural forests. Cecropias can be found near water because willows predominate there. This species of nocturnal animals is drawn to lights at night. Numbers are decreasing in some areas as a result of habitat loss, pesticides, and other factors.

More than 20 different species of Missouri trees and shrubs are consumed by larvae, including willows, dogwoods, cherries, plums, apples, box elder, and various maples (including box elder). The adults of other giant silk moths lack or have small mouthparts, and they can only survive for a short time without food by using the food they stored as caterpillars and consumed as adults. 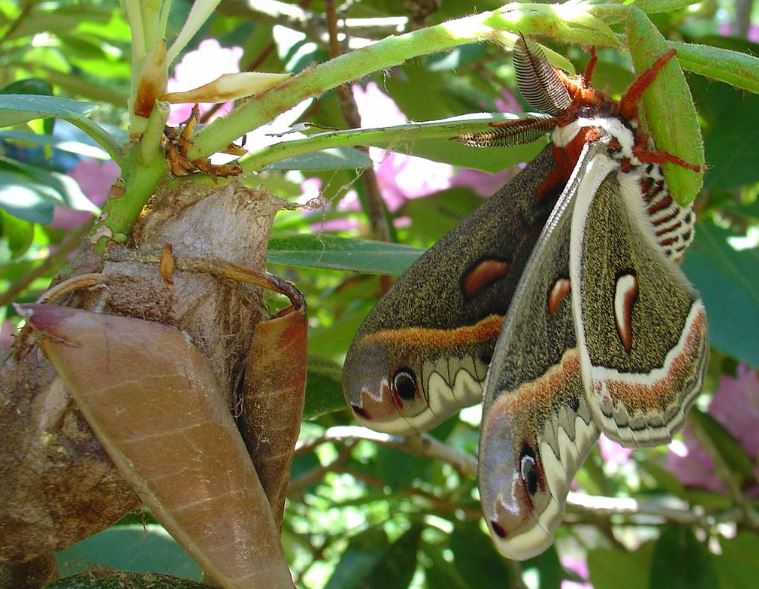 Each moth only has a brief adult life of about two weeks, from the beginning of April through the end of June. They are nocturnal and release scents to “call” to potential mates just before sunrise. On the leaves of the hosts, eggs are laid in rows. In about two weeks, the eggs will hatch, and the larvae will initially feed in packs. The caterpillars spread out and eat on their own as they get bigger. The brownish-gray cocoons are wrapped in silk along their entire length and attached to a twig in a secluded area. Although there is only one brood in our state, adults can be seen from April through June as they emerge over a lengthy period of time. This moth pupates over the winter.

Many people enjoy the hobby of collecting butterflies and moths, and the cecropia moth is often considered the “jewel” of these collections. Many more people enjoy watching a live moth resting on a backyard tree just as much. This enormous silkworm moth may be dwindling in some areas of its range as a result of a tachinid fly parasitism that was introduced to counter the destructive, invasive nonnative spongy moth.

Researchers made a significant advance in their understanding of insect metamorphosis in 1956 when they discovered a hormone that, when produced in sufficient amounts, allows a caterpillar to continue growing and molting into larger caterpillars. However, when the hormone is no longer produced, the insect molts into a winged, sexually mature adult. The term “juvenile hormone” (JH) now refers to the hormone. The initial discovery was made in 1956 using cecropia moth larvae. In Greek mythology, an Athenian king by the name of Cecrops also existed. The scientific name of a different Missouri butterfly, the red-banded hairstreak, also references this mythological character.

The countless varieties of caterpillars that munch on tree leaves provide a free natural pruning service. The adults give their predators a sizable meal. Numerous parasite species also control the number of cecropias. Squirrels consume the pupae.

Squirrels also eat cecropia moth pupae, which can significantly lower the population. Tree trimming and nighttime outdoor lighting can both be harmful to cecropia moths. The native North American cecropia moth is particularly at risk from Compsilura concinnata, which was brought to the continent to combat invasive European spongy moths.

A shipment of dogwood shrubs in August 2012 unintentionally carried a cecropia moth caterpillar from Ontario to St. John’s, Newfoundland. The latter province is not where Cecropia originated. The caterpillar started spinning a cocoon 48 hours after it arrived; it spent the winter at the federal Agriculture and Agri-Food research facility in St. John’s, where the owner of the importing business had transferred it. The facility’s staff gave the mostly black and red female moth, Georgina, the name on May 29, 2013, when she emerged from her cocoon with a wingspan of about 20 cm (7.9 in). Georgina was allowed to live out her natural life, and researchers planned to pin and preserve her for later research.