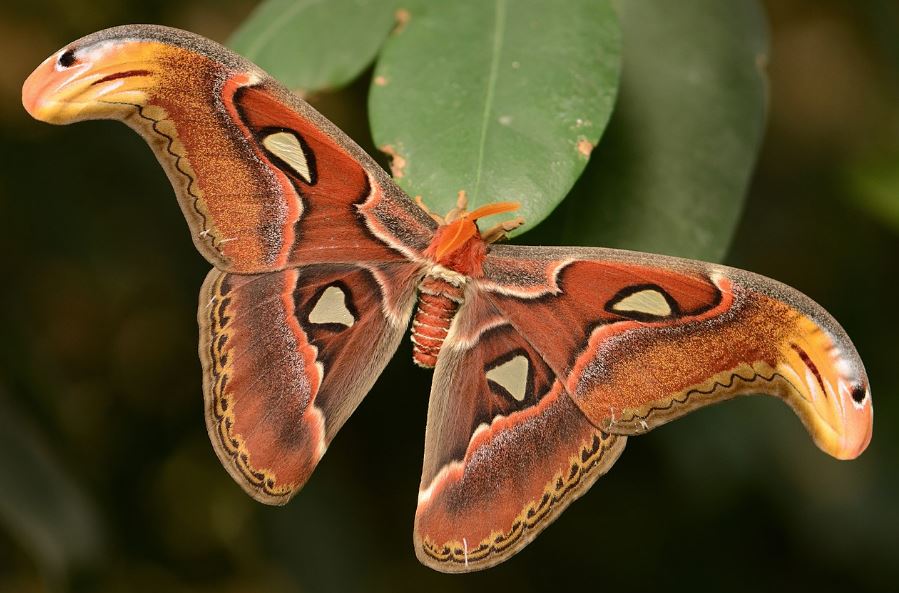 An Atlas Moth might be found if you are in Southeast Asia. This moth is among our top picks thanks to its large, 10–12 inch wingspan. This moth is one of the biggest moths in the world. The wings are a reddish-brown color with intricate white, black, pink, and purple patterns. The color on the underside is paler. These moths are believed to have a defense mechanism against predators built into their vibrant pattern. The wings’ tips resemble snakes’ heads, which would serve as a defense against foes. When predators are nearby while they are in the caterpillar stage, they will spray secretions somewhat like skunks.

More About The Giant Atlas Moth

One of the biggest lepidopterans is the Atlas moth, which can reach a wingspan of up to 24 cm and has a wing surface area of roughly 160 cm2. The wings are disproportionately larger than the body. The triangular, scale-free windows and a pattern of black, white, pink, and purple lines can be seen on the reddish brown upper side of the wings. The wings’ undersides are paler. When the moth is confronted by potential predators, movements of the wings exaggerate the resemblance between the forewings’ prominent extensions and markings that resemble a snake’s head

The Atlas moth does not eat after emerging from the cocoon; instead, it relies on fat storage for energy. It has a very short, vestigial proboscis. Every flight uses up precious energy and can shorten their already brief lives by several days because it only has a one- to two-week life span. They fly as little as possible to save energy. A female will wait for a male to appear, be fertilized, lay eggs, and eventually pass away. 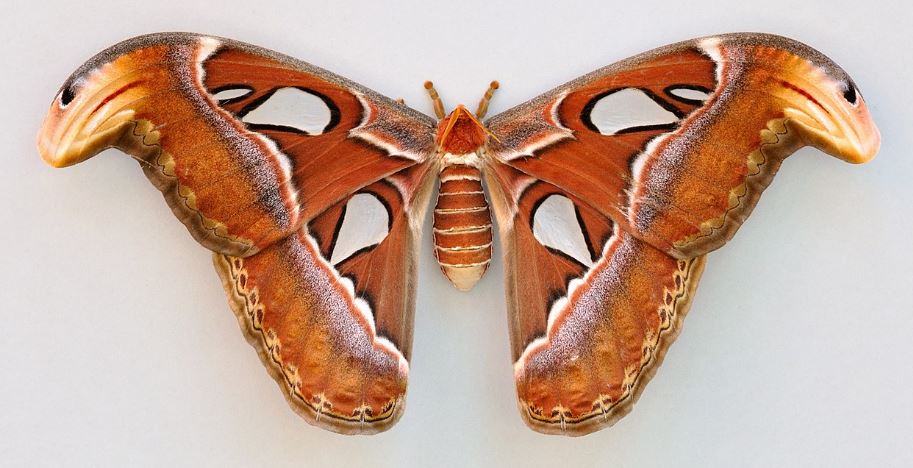 To entice a mate, females expel potent pheromones through a gland at the end of their abdomen. The female stays close to where she has dumped her cocoon. She looks for a perch where her pheromones will be best carried by the air currents. Using chemoreceptors on their feathery antennae, males can locate and focus on these pheromones from distances of up to several kilometers. After fertilization, the female releases a number of 2.5 mm in diameter spherical eggs on the undersides of food plant leaves.

After hatching, dusty-green caterpillars gorge themselves on the leaves of evergreen, citrus, cinnamon, and guava trees. The caterpillars can reach lengths of 11.5 cm and a thickness of 2.5 cm. Their backs are covered in white, waxy, fleshy spines, which become more pronounced at later instars. On the last abdominal segment, there is a large green spot surrounded by an orange ring just below the prolegs. Their primary food source is typically their eggshell. If you are fond of caterpillars, you should know the seven world’s largest caterpillars.

The caterpillars are prepared to pupate when they are about 11.5 cm long. They spin a 7-8 cm long paper-like cocoon that is tangled with dried leaves and fasten it to a twig with a silk thread. Depending on the environment, the adult moths emerge from the cocoon after about four weeks.

Adult Atlas moths fly poorly and clumsily. The moths sleep during the day and fly at night to save energy. The adults can’t eat because their mouthparts haven’t fully developed, so they only rely on the fat reserves they built up as larvae. They only have a short lifespan as a result, and during that time, their only goal is to find a mate. Although adults can be seen flying throughout the year, they are most common from November to January. 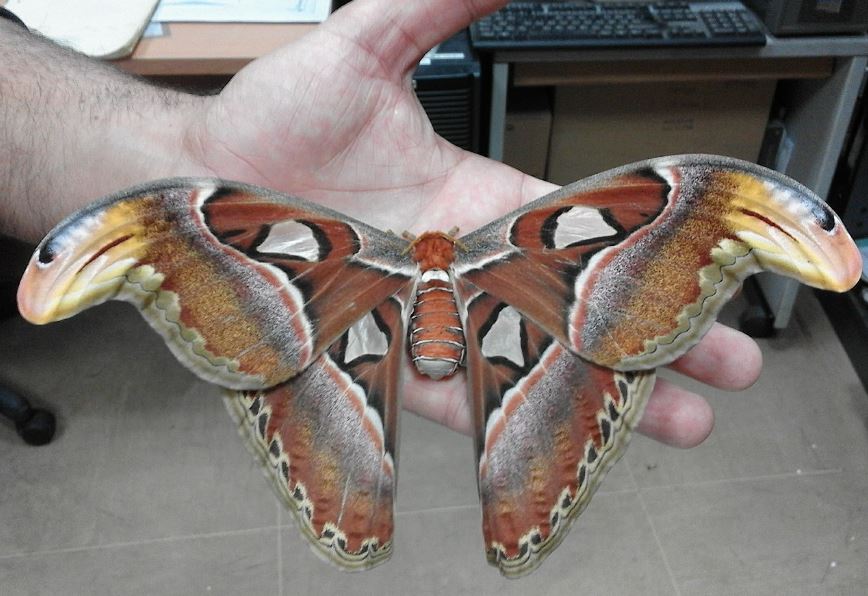 Non-commercial cultivation of Atlas moths for their silk is done in India. Because it is secreted as broken strands and is less desirable, the Atlas moth’s silk is less desirable than that of the closely related domestic silkmoth (Bombyx mori). Fagara, brown silk that resembles wool, is thought to be more durable.

The defense tactics used by caterpillars of the atlas moth are also impressive. The bluish-green caterpillars have spiny protuberances and a white waxy coating, giving them a menacing appearance. The larvae can spray a secretion that has a potent odor and can be used to repel predators like ants and lizards at a distance of about 12 inches. Additionally, they have the ability to spray an “irritant secretion” up to 20 inches away into the eyes of dangerous birds.

Atlas moth adults don’t eat because their mouths aren’t even fully developed. Their tiny, non-functional proboscis is tiny. Although it seems unusual, this is a fairly typical moth behavior. They survive by storing reserves while still caterpillars. The atlas moth’s sole objective as an adult, after emerging from the cocoon, is to locate a mate. The moth spends all of its energy on reproduction and doesn’t venture far from its cocoon.

The Wingtip of The Giant Atlas Moth

The atlas moth has what appears to be a built-in defense mechanism against predators; the tips of its wings resemble the heads of cobra snakes. The atlas moth moves its wings slowly in the manner of a snake when it is in danger to fend off would-be predators. It appears likely that this wing marking is a survival strategy because cobras are found in the same regions as the atlas moth and because its primary predators, birds, and lizards, are visual hunters.

The atlas moth also has what appear to be false eyes on its wings, in case the snake markings aren’t enough to deter predators. The moth may be saved from death if attacked by predators thanks to these eyes, which can startle them and divert them from more vulnerable areas of the body.