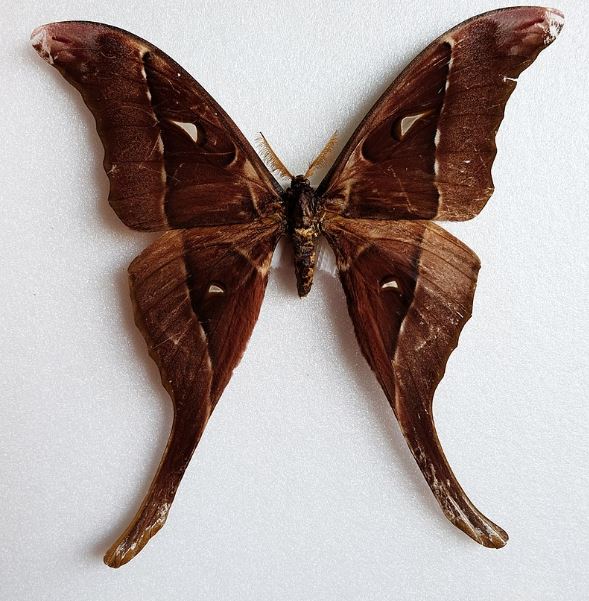 The Hercules moth (Coscinocera Hercules) does grow to an incredible size, but it lacks superhuman strength and a record of valiant deeds. One of the largest species of moth in the world, adult female Hercules moths measure about 27 cm in length. The tallest Hercules female ever discovered reportedly measured 36 cm. The hindwings of males have long tails and are more lightly built. They originated in the northern Queensland and New Guinea rainforests.

More About The Hercules Moth

Hercules Moth isn’t given much time to play in the trees despite growing to enormous size. Also, it is one of the biggest moths in the world. As soon as they emerge from their cocoons, it’s business time. If the males are extremely lucky, they can live up to two weeks and longer than one night. These moths are not bothered by bothersome needs like feeding because they lack mouths. Instead, the female starts to work, exuding a strong pheromone (airborne perfume) that draws men in close proximity. He finds the waiting female after spotting her advertisement, they mate, and the story is over.

The females lay about 300 eggs, which they attach to the leaves of a plant that serves as food in the rainforest, frequently a Bleeding Heart plant (Homalanthus spp.). The journey to the cocoon, which involves a fast-paced cycle of eating, growing, and molting, starts after the caterpillars have been in hiding for about two weeks. The later stages of the caterpillars are stunningly colored, with bright blue-green bodies, yellow spines, and red spots; initially, they are white with bristly spines.

Life Cycle of The Hercules Moth 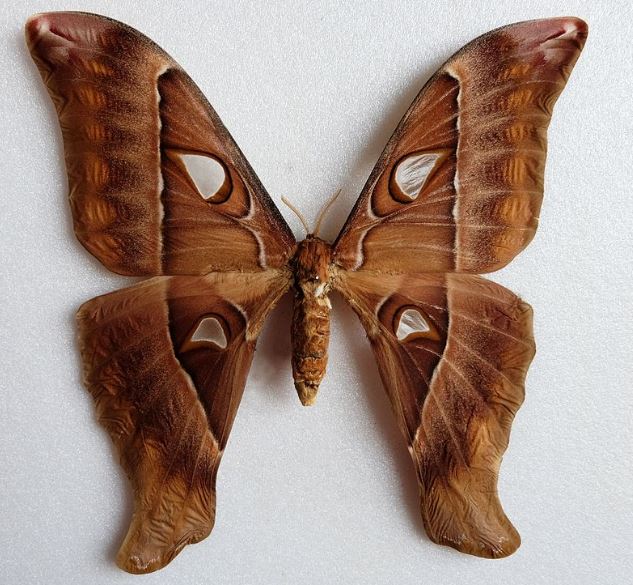 A single Hercules moth female can lay up to 300 ova (eggs). The female of the food plant adheres the eggs to a leaf. The orange-colored eggs are tiny, about the size of a matchhead. It typically takes eggs 14 days to hatch. A single caterpillar will hatch from each egg.

The caterpillar will create a silk cocoon around itself when it is ready to pupate, then retreat there to change into a pupa. It may take the pupae several months to several years to become an adult moth

When the wings are spread out, they are brown with zigzag white stripes. Four clear windows, two up and two down, are also used to identify each wing. The color is the same with just two windows visible when the wings are closed. The hind wings of the male Hercules moths are extended to form long tails.

Most of the flying to locate the adult females is done by adult males. Females release pheromones, which are perfume-like scents, to help males locate them. These pheromones can be detected by male moths up to two kilometers away. The male will take flight, whereupon he will locate a female and mate. The pheromones of these moths escape our detection. Compared to males, who have long wing tails, females are bulkier and have short, stumpy wing tails.

Diet of The Hercules Moth

The Hercules moth is a non-eating adult. Although their larvae will consume the leaves of various rainforest trees, including Dysoxylum muelleri, Glochidion ferdinandi, Timonius rumphii, and Timonius singularis, they prefer to consume the leaves of the Bleeding Heart tree (Homalanthus populifolius). The caterpillar-turned-adult Hercules Moth continues to live in food storage facilities. The main objective of these magnificent giant moths, which only have a 10- to 14-day lifespan, is to find a mate and reproduce.

What Does A Hercules Caterpillar Moth Eat?

Caterpillars of the Hercules moth eat plants like Omalanthus populifolius, also known as the bleeding heart tree. Each batch of about 12 caterpillars at the Australian Butterfly Sanctuary will result in the removal of one large tree. Additionally, caterpillars can eat Timonius rumphii, Timonius singularis, Dysoxylum muelleri (red bean), and Glochidion ferdinandi (cheese tree). It also consumes water droplets that fall from the host plant. The Hercules Moth spends the majority of its life as a caterpillar. Before entering a cocoon, it will remain in this stage for about 3 months. Amazingly, these caterpillars can reach a length of 12 cm and are covered in yellow spikes. Given the size of the moth, it makes sense that the caterpillar is so enormous. The 36 cm wingspan of the largest Hercules Moth ever recorded.

The caterpillars can be handled because they are harmless, but extreme caution must be used when luring them away from the branches or leaves. Caterpillars have four pairs of sucker feet at the end of their bodies in addition to six true legs. Care must be taken to avoid damaging these sucker feet because they can hold on quite tightly. They have two enormous claspers with false eye spots on them that are located at the very end of their bodies and that firmly grasp the branches. You will need to be patient as the caterpillar climbs onto your hand because these cannot be forced off without harming the caterpillar.