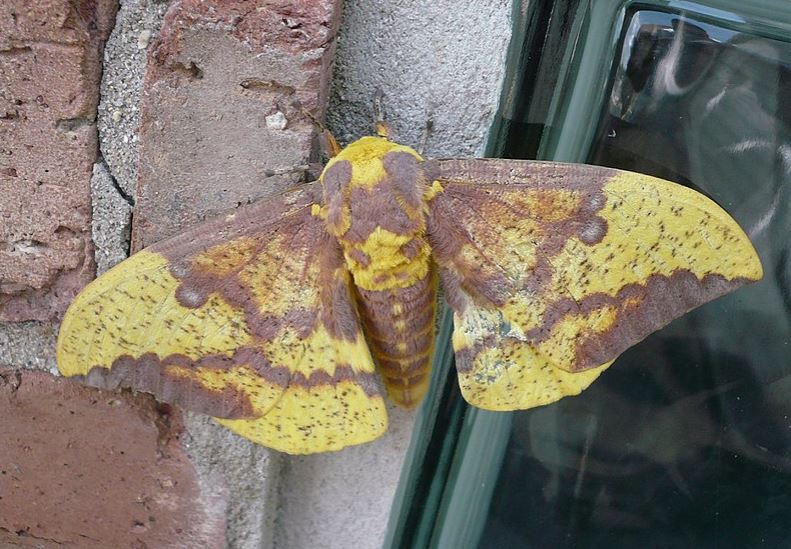 The imperial moth, Eacles imperialis, is a Nearctic member of the Saturniidae family and Ceratocampinae subfamily. Dru Drury published the first description of the species in 1773. There are locations where the imperial moth can be found in both Canada and the United States. The antennae are one of the primary distinctions between males and females of the Imperial Moth. The male antenna is quadridentate before becoming more slender and singular-looking. The female only has an antenna that looks singular and lacks the quadripectinate.

Description About the Imperial Moth

Adults have wingspan measurements of 80 to 175 mm. This species has a wide range of variations. The adult’s coloring can differ noticeably on this, but it is always primarily yellow with red, brown, and purple blotches. The imperial moth is one of the biggest moths in the world. Both the light and dark morphs of this species can be found in the northern and southern regions of their range. Individuals from the north may have fewer dark markings than individuals from other regions of their native range. The color of larvae can range from orange in the first instar with black transverse bands and large spines to 3-5.5 inches long in the fifth instar with long hair and shorter spines. Green with yellow spiracle patches, as well as dark brown and burgundy with white spiracle patches, are examples of color morphs.

With the exception of a population that still exists on the Massachusetts island of Martha’s Vineyard, this species, which was once common in the eastern United States, has virtually disappeared from the entire region of New England. The fragmentation of suitable habitat, pesticides, insecticides, herbicides, street lamp light that interferes with their nighttime navigation and mating activities, and the well-intentioned but unfortunate introduction of nonnative parasitoid insects that were supposed to fight only the invasive gypsy moth appears to be human-related causes of the decline.

Check out Gene Stratton-natural Porter’s history books if you like writing about butterflies and moths and other critters of the natural world (1863–1924). She was an accomplished wetland conservationist, a pioneering moth and nature photographer, an author of widely read books and articles on conservation, a native of Indiana, and even a producer of silent films. Her first encounter with this species is described in the chapter “The Yellow Emperor” of her book Moths of the Limberlost (1912). 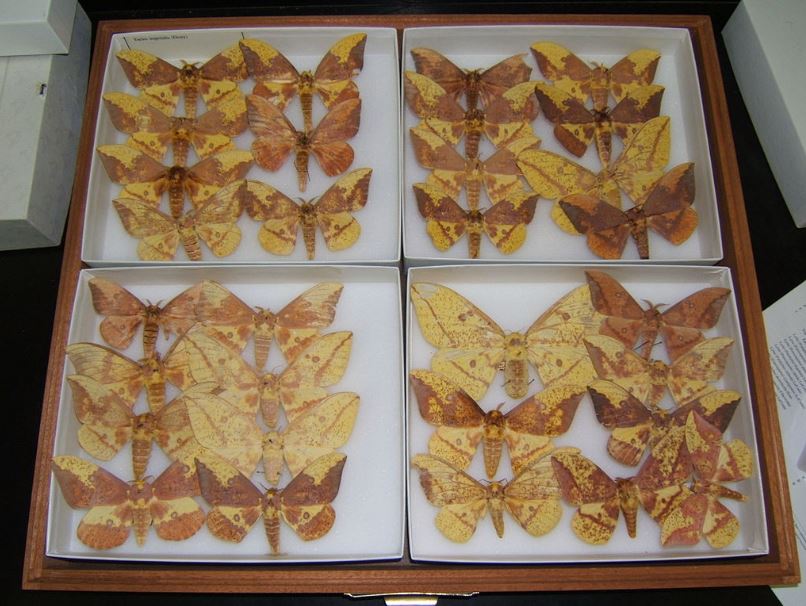 There is only one brood each year. It is well known that the imperial moth’s larvae feed on a wide range of hosts. However, there might be differences in food preferences by region. The pine, maple, oak, sweetgum, and sassafras species are the plant hosts of the imperial moth that have been reported the most frequently.

At dusk, the female will lay eggs. On either side of a leaf from the host plant, it will do this either by itself or in groups of two to five. Ten to twenty days after being laid, the eggs begin to hatch. Larvae that have just emerged from the egg will consume it.

Adult wingspans are estimated to be between 3 and 7 inches. Adults will emerge to mate once a year. Emergence happens at sunrise, and mating happens the following night. They typically emerge in the middle of summer in the northern part of their range, but at various times throughout the year in the southern part. Usually, males appear days before females do. A pair is more susceptible to predators, especially foragers, following a mating event. The Saturniidae’s adults do not consume food. Their mouth regions have contracted.

Imperial moth caterpillars are typically uncommon, so the only telltale sign of an infestation might be frass pellets that fall to the ground beneath infected trees. Numerous eggs are laid by each female moth. For birds, the caterpillars are delectable. Predators are ready to attack caterpillars that are feeding in an exposed position on foliage.

Caterpillars are also plagued by numerous parasites and illnesses. Therefore, a mother moth is extremely fortunate if two of the hundreds of her offspring—two daughters—live to have grandchildren. It seems wasteful to manage imperial moth caterpillars with an insecticide because they are typically scarce. However, should the need arise, they are vulnerable to the majority of insecticides classified for use in home landscapes.

This type of moth can be found from central Texas and Maine in the west to eastern Nebraska in the south. The northern Great Lakes basin and the northernmost third of Michigan’s Lower Peninsula are both home to the subspecies pini. Additionally, the dult imperial moth has an ecosystem connection because of how much it resembles dying yellow sassafras, maple, hickory, or tulip tree leaves thanks to its base color of a yellow and random pattern of rusty browns. They are able to survive thanks to this camouflage during their days or weeks of adulthood.